by Rob Roos MEP
in Opinion 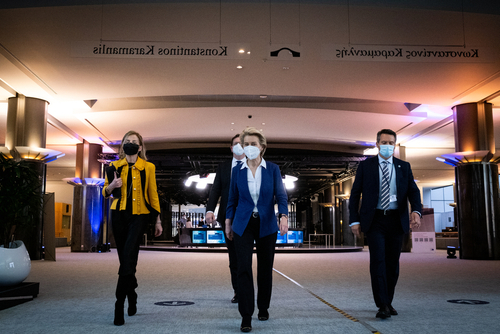 BRUSSELS,BELGIUM-04 13 2021 : Ursula von der Leyen arriving at the european parliament for a extraordinary conference of presidents following the sofagate in turkey.

Brussels (Brussels Morning) ‘Sofagate’ now seems a distant memory. A few weeks later, however, now that the dust has settled, it is very important to reflect long and hard on the issues raised and on the many lessons to be learned in parliament from this diplomatic spat.

Ms von der Leyen indicated that, during her visit to Ankara, she had felt ‘hurt’ and ‘abandoned’ and accused Turkish President Erdoğan of subjecting her to sexist treatment by failing to provide a chair for her as he had for Charles Michel.

I have to admit that, when I rose to speak during the European Parliament debate on this matter, I did not actually concern myself with the reasons for which no chair had been provided for the President of the Commission, or why her staff had failed to anticipate such a situation. I have to say that the obsession with such an issue appeared inappropriate, to say the least, at a time when our citizens were in the throes of the COVID-19 crisis that has been driving so many small businesses to the edge of bankruptcy and creating widespread mental anguish, especially among the young. I did, however, take advantage of her presence to raise the question of her failure to ensure the purchase of vaccines, as a result of which the COVID pandemic has lasted far longer in the EU than in the United Kingdom, Israel or the United States.

To my astonishment, I found myself practically alone, since my fellow MEPs were too busy falling over themselves to excoriate President Michel and President Erdoğan for their treatment of the Commission President in Turkey. They failed to utter a single word about her mistakes in handling the COVID crisis or to take advantage of this ideal opportunity to address the vaccine purchase fiasco while she was actually in the room. Instead, Parliament simply handed her a free pass. She left the Chamber as she entered it, unbloodied and unbowed. ‘Mission accomplished’, she must have thought to herself. Turkish musical chairs had carried the day and obsession with EU prestige had outweighed any concerns about the well-being of millions of European citizens. The failures of Ms von der Leyen were matched by the failure of many of my colleagues to rise to the occasion that day.

It speaks volumes that she has presented herself as a victim at a time when so many EU citizens are beset by the fallout from the COVID-19 crisis. Only weak leaders have recourse to such tactics.

Frankly, the reasons for which Ms von der Leyen was appointed to the top post in the EU executive have always been something of a mystery to me. There is no doubt that Germany, was happy enough to be rid of her, in view of her record as German Defence Minister and the shambles she left behind her in the Bundeswehr. Firstly, it found itself short of the necessary manpower and equipment to perform its tasks properly. Secondly, her term of office was dogged by constant issues of probity, culminating in a bill presented to the German taxpayer for repairs to the ‘Gorch Fock’ German Navy tall ship, the original estimate of just EUR 10 million having swelled to EUR 135 million. Only in politics is such failure rewarded by promotion to a top job.

On 31 August 2020, she announced the Commission’s intention of launching a vaccine procurement programme. That was her chance to show that a European approach to complex issues has only advantages. As things turned out, however, we now find ourselves shouldering the consequences of failure to roll out a rapid European vaccination campaign. What is more, the buck does not stop with Ms von der Leyen. It is the pharmaceutical companies that are taking the blame. Playing the Sofagate victim card was therefore just one more example of her distorted view of what leadership actually entails.

My fellow members are also to blame for letting slip the opportunity that presented itself on 26 April to call her to account for the vaccine chaos. I am frankly disappointed in them. I could not care less about the reasons for which no chair was provided for Ms von der Leyen and am not losing a single night’s sleep about the impact this is having on the EU’s international prestige. I just hope that her attitude since the incident in question will have opened a few more eyes to the fact that she is the wrong woman in the wrong place. If so, at least the Sofagate affair will have served some purpose after all.