by Dr. Marta Vrbetic
in Opinion 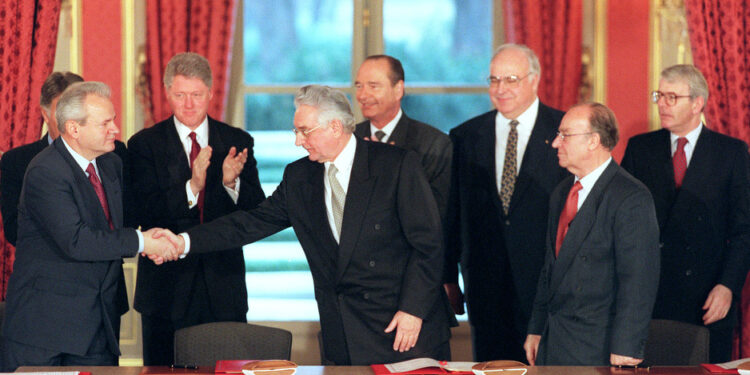 The US-EU led effort on electoral reform has run into destabilizing rhetoric in Sarajevo ahead of the October elections. High Representative Schmidt may impose changes to the unconstitutional election law. However, the failure of the parties to agree on electoral reform reveals deep disagreements over power-sharing as established by the Dayton Accords, thereby bringing the future of Bosnia and Herzegovina into question

Belgium (Brussels Morning Newspaper) For well over a year, American and European diplomats have negotiated electoral reform, hoping to strengthen the state of Bosnia-Herzegovina (BH) by reinvigorating the Bosniak-Croat Federation. According to American diplomat Matthew Palmer—who worked together with EU’s Dutch diplomat Angelina Eichhorst–the United States wants “a stronger, more functional Federation… [that] would help stabilize the political situation…and provide a kind of counterweight to Republika Srpska.” The Bosniak-Croat Federation and the Serb-dominated Republika Srpska (RS) are BH’s two Entities set up by the Dayton Accords in 1995, at the end of brutal war.

As outlined by US Secretary Blinken and Matthew Palmer, the United States wants to preserve the Dayton 1-2-3 framework with limited constitutional changes to implement the European Court of Human Rights (ECtHR) decisions regarding the electoral rights of minorities. The Dayton 1-2-3 formula expresses the critical peace bargain reached at Dayton in 1995: one BH state (1) in exchange for its internal reorganization into two entities (2) and equal power-sharing between three constituent peoples (3) representing over 97% of the BH citizens: Bosniaks (50.1%), Serbs (30.8%), and Croats (15.4%).

Having no entity of their own, Croats depend on electing their own representatives to partake in the shared governance, drawing protection from their status as a constituent people. However, after the imposed constitutional changes in 2002, Bosniaks began exploiting loopholes to vote Croat representatives into office. The Constitutional Court (CCBH) declared election law unconstitutional but its decision has never been implemented due to the opposition of Bosniaks. Worried over the deteriorated Bosniak-Croat relationship and dysfunctionality in the Federation, Palmer and Eichhorst took several trips to BH to lead the electoral reform talks.

However, despite their internal differences on other matters, Bosniak national parties, Bosnian civic parties, and the civil society that supports them–or political Sarajevo, for short–have been unified in rejecting the US-EU electoral proposals. Sarajevo’s ultimate goal is a “civic state”—a unitary state without entities, constituent peoples, or power-sharing. In the words of its chief proponent Zeljko Komsic, Sarajevo is anticipating “the post-Dayton phase of normal and stable [BH that] can only be its civic phase.” Rejected by Serbs and Croats, Sarajevo’s vision of a civic state would give power to the Bosniak majority, in defiance of the Dayton system of power-sharing. From the Dayton peace 1-2-3 formula, Sarajevo wants to keep only the recognized single state (1), while eliminating entities (2) and constituent peoples (3).

This connection between the Croat electorate and their representatives has been missing when Croat officials get elected by the predominantly Bosniak electorate.

Aforementioned politician Zeljko Komsic provides a stark example of ethnic representation without the legitimate political representation. The titular Croat member of the tripartite Bosniak-Croat-Serb Presidency got reelected in 2018 despite the overwhelming loss of the Croat vote. About half of the voting districts that Komsic won have fewer than three percent Croats, and only one has more than 10% Croats. A persona non grata in the Croat inhabited areas, Komsic lost the districts holding 86% of the Federation’s Croats, while his opponent won all districts except one holding more than 20% Croats. A well-known advocate of a unitary civic state with a majority-voting system, Komsic works in tandem with Sefik Dzaferovic, the Bosniak member of the BH Presidency. Both Croat Komsic and Bosniak Dzaferovic got elected from the territory of the Federation, where Bosniaks (70.4 %) outnumber Croats (22.4%) by more than 3 to 1. By electing two members of the tripartite Presidency, Sarajevo maintains a two-thirds majority against the Serb member, Milorad Dodik, elected by Republika Srpska.

Disregarding that Bosniaks elected Komsic, Sarajevo maintains that Komsic represents Croats in the Presidency by virtue of being an ethnic Croat. According to Sarajevo, declaring oneself a Croat qualifies one to run for any Croat seat in the country’s system of power-sharing. The supporters of Sarajevo argue that ethnicity is determined subjectively (and can be therefore changed) through self-identification. They reject the CCBH Ljubic decision, alleging that its implementation would entrench the rule of the HDZ-BH, the party dominant among Croats in BH. In reality, the subjective interpretations of ethnicity have been used for ethno-electoral engineering, while electoral reform would most likely encourage political pluralism by enabling Croats to vote for smaller parties without fear of getting outvoted by Bosniaks.

Sarajevo fields its own self-identified Croat, Serb, and minority candidates–to fill the ethnic quotas for the non-Bosniak seats–through the parties supported predominantly by the Bosniak electorate. Intent on governing as if the Dayton power-sharing did not exist, Sarajevo looks to elect a multiethnic government but on Sarajevo’s political platform, claiming that implementing Ljubic would increase ethnic polarization. How Sarajevo’s strategy works in the real world shows the case of Komsic–an ethnic representative of Croats, but a political representative of Bosniaks. Imposing Komsic repeatedly upon the Croat electorate has been the single most divisive issue that has driven a wedge between Croats and Bosniaks.

As the key Dayton power-sharing institution, the Federation House of Peoples (FHoP) represents constituent peoples by parity–Bosniaks, Croats, and Serbs each have 17 deputies (there are also 7 seats for minorities). However, based on unamended election law, Bosniaks can elect most of the FHoP deputies, including two-thirds (12/17) of the Serb FHoP club and one-third (6/17) of the Croat FHoP club. In any case, the Serbs’ participation in the BH governance is assured through Republika Srpska, where most of Serbs live. However, most of Croats live in the Federation, but their legitimate political representatives may end up excluded from the post-election governace if they control less than two-thirds (11/17) of the Croat FHoP club.

This perplexing situation was inherited from High Representative (HR) Wolfgang Petritsch, who used the Bonn powers to impose the constitutional amendment in 2002 prescribing that, regardless of the present-day demography, “there shall be at least one Bosniac, one Croat, one Serb from each Canton” elected into the FHoP. Superficially even-handed, the Petritsch rule helped place the Croat and Serb seats under the control of Sarajevo in the cantons where the Bosniak electorate holds the sway and thus elects its own Croats and Serbs into the Croat and Serb FHoP clubs, respectively. For example, the Podrinje (Gorazde) canton houses 22,313 Bosniaks (94%), 885 Serbs (3.7%), and 24 Croats (0.1%), but still elects one Bosniak, one Serb, and one Croat. Formerly a Bosniak, the official holder of the Croat Gorazde seat self-identifies now as a Croat but continues to vote together with his Bosniak allies, rather than Croat deputies in the FHoP. Furthermore, while the 24 Croats of Gorazde get one FHoP seat—a gift to Sarajevo–33,600 Croats from the Posavina canton cannot get more than one FHoP seat. Expectedly, the CCBH found the Petritsch amendment unconstitutional for violating the rights of the constituent peoples to get an equal and legitimate political representation in the FHoP.

Hence, when faced with the failure of electoral reform, in late July HR Christian Schmidt proposed that officials get elected from the districts housing at least 3% of their constituencies. However, Sarajevo ended in an uproar, charging that the electoral changes amounted to “legislating apartheid,” Nuremburg-like “blood-quantum election law,”and the continuation of the Srebrenica genocide. In a sign of escalation, Bakir Izetbegovic claimed to be counting his fighters, hunters, and drone operators, presumably in preparation for war.

The uproar about the “minority seats” and “apartheid” that caught the world’s attention is about the FHoP seats like Gorazde, which Sarajevo has been stocking with its own allies, denying Croats the legitimate political representation according to the CCBH.

The Dayton provisions were meant to prevent precisely what Sarajevo intends—to assimilate Croats politically by erasing the Dayton category of constituent peoples and establishing an unconstitutional majoritarian rule benefiting Sarajevo’s constituencies. Sarajevo’s elites, including Komsic’s own advisor, have repeatedly aired the plans to change the Constitution and replace power-sharing with a majority rule. Realizing these plans—amounting to a de facto constitutional coup against BH’s Dayton based Constitution—requires that Sarajevo should win the majorities beyond what the Constitution permits in the October 2022 elections; hence, Sarajevo will not accept any electoral reform before the elections.

The BH Croats could react to Sarajevo’s constitutional coup by boycotting the Federation institutions, carving out their own autonomous region. Russia-supported Republika Srpska could use the troubles in the Federation to declare independence. Clearly, unilaterally upsetting one of Dayton’s categories such as the constituent peoples (3) can jeopardize the entire 1-2-3 Dayton peace bargain.

To be sure, many in the West would be tempted to agree with the view that democratizing BH should involve eroding ethnic power-sharing in favor of a citizens’ majority rule. Western democracies are not built around ethnicity but upon politically defined citizenship. However, the established democracies that many hold up as a role model for BH have not gone through violent disputes over sovereignty recently but have enjoyed long periods of domestic stability. On the other hand, the mechanisms of power-sharing like Dayton existin post-conflict societies to keep peace by providing the guarantees of inclusive governance for actors who once fought for their respective objectives on the battlefield.

The chasm over electoral reform has demonstrated irreconcilable differences. Threatened by secession, the country is also riveted by demands for imposing a centralized, majoritarian rule. Not even the Belgian model to represent different linguistic communities could provide a way out of the BH quagmire because only a “unitary and civic model” is acceptable to the majority of Bosniaks. Sarajevo rejects Dayton and power-sharing, while Croats and Serbs rebuff a majority rule under Sarajevo. Consequently, while still an international protectorate, BH is not likely to outgrow Dayton as a self-governing, viable single state.