Why is the town hall of Brussels City asymmetrical? 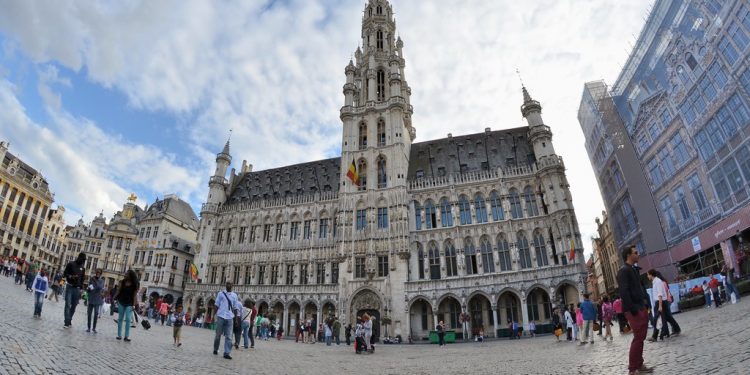 BRUSSELS (Brussels Morning) – It remains a great anecdote to tell visitors to the Grote Markt. The architect had jumped from the town hall when he realised too late that the wings on both sides of the tower were not of equal length. While the story is being told, a stop is made in the courtyard of the town hall where a large star lies. It would be the place where the man crashed. But is that sensational legend true?

If you stand in the courtyard for a moment, you immediately spot the day trippers who point from the tower to the star. Unfortunately, we have to disappoint them. The information in their guidebook or received from that one local is incorrect. The Suicidal Architect is a little monkey story. So what’s going on? Just another strong example of urban planning Belgitude. One from when Belgium was not even Belgium yet.

The town hall is one of the oldest buildings on the Grote Markt. It was built in the early fifteenth century in 1402, thanks to the sponsorship of a wealthy family. With the construction of this prestigious building, he wanted to influence policy. Architect Jacob van Tienen designed the building from a belfry, which is now the lower part of the tower. It was the setting for important power struggles over the city’s governance.

For example, there was the struggle between the wealthy families who made the construction of the town hall possible against the craft guilds. Those associations representing various trades of the time demanded a say in the board. And that is why they also wanted a place in the building from which they controlled. That would have been the reason to expand the town hall in 1444.

A new architect was appointed who worked in the original style of Jacob van Tielen. Not only was a new wing added, the belfry was also transformed into a tower. However, there was a problem. Because the original design was not to have two wings, there was not enough room on the other side of the tower. This made the right wing shorter than the left wing. Not a mistake by the architect, but simply a limited expansion due to lack of space.

The fact that the difference between the two constructions is now almost invisible is due to the restoration after the bombing in 1695. The attack by Louis XIV on the city was one of the most violent in the history of Brussels. The attack took the lives of many residents and destroyed much of the patrimony of the city centre. Many streets would have been on fire and the Grote Markt was also a ruin after the offensive.

Only the walls of the town hall were still standing and the tower. Superstitions attributed this last miracle to Saint Michael, who was already on top at that time. During the reconstruction, the town hall was thoroughly overhauled. For example, it received three new wings at the back and a renewed front facade. Thanks to this new facade, there is hardly any difference between the parts that were built 40 years apart.

The extra wings are arranged around the stone star that lies in the courtyard of the town hall. The reason it is there is much less grim than what is told in the urban legend. The star became the zero point of Brussels from where the distances to the capital were measured. But it is not in the middle of the building.