The withered city: Brussels Environment is spraying green spaces as much as it can 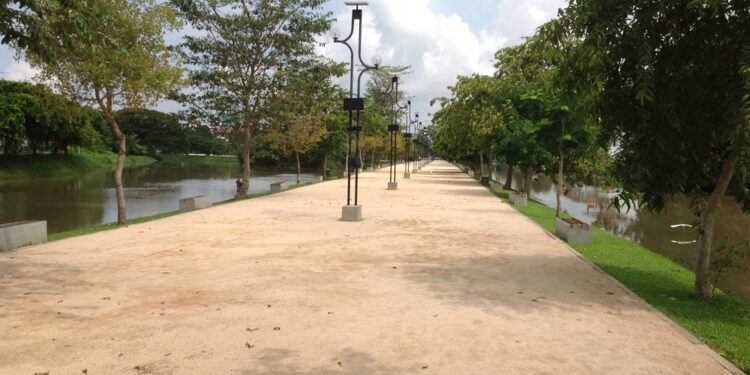 Brussels, (Brussels Morning)- Yellow lawns, trees that lose their leaves and bone-dry soil. Not only are people eager for the end of the heat wave, the flora of Brussels could also urgently use a splash of rain. In the meantime, Brussels Environment, which manages the regional parks, is saving what can be saved.

The parks and forests in the Brussels-Capital Region are groaning under the heat. In some places it already feels like autumn, with the many leaves falling due to the heat and the lack of rain .

The green service of the City of Brussels therefore does everything it can to save the precious flora on its territory from withering as much as possible. With a tanker, a van and two vehicles with a water reservoir, the municipal services go to battle.

“But we have to choose,” Laurent Somme told the French-language newspaper. He coordinates the management of green spaces for the Brussels Environment. “We primarily spray the most vulnerable plants, such as young trees, annuals and perennials, but protected nature areas also receive water.” In addition, people are thinking about planting species that are more resistant to heat and drought.

The yellowed grasslands don’t get any water, but although many a Brussels pelouse seems to be dying today, grasses can survive a drought for up to six weeks, Somme tells us.

As for the forests in Brussels, they seem to be better able to withstand the heat for the time being, although the drought may still take its toll there: “At the moment it is difficult to estimate the impact of the warm weather. The effects of this often only start to be felt after a few months or even years,” says Somme.

For example, spraying in the Sonian Forest does not work for the Brussels environment. “We are monitoring the situation,” says forest ranger Mathieu Piret. “For example, we make an annual inventory of the condition of the trees, in which we look at how they are developing.”

In the meantime, at Bruxelles Environnement, they are looking at how they can make the Sonian Forest more resistant to the ever-rising temperatures. “At the moment, 70 percent of the forest consists of beech trees, whose roots are close to the surface. As a result, they are not as resistant to the warm temperatures as , for example, oak .”

Another concern are the ponds in Brussels. “We notice that blue algae develop in standing water due to the rising temperature of the water and the lack of oxygen,” says hydrologist Benjamin Thiébaut in Le Soir . “A dangerous bacteria,” he warns, “because they are harmful to humans and animals.”

Although prohibited in any case, Brussels Environment strongly advises against swimming in open water. Dogs should also not take a refreshing dip in ponds and it is better to stop feeding ducks, because it encourages the development of blue algae.