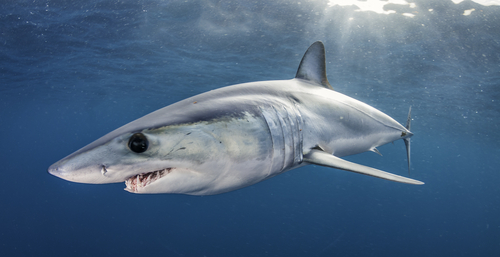 Short fin mako shark swimming just under the surface, offshore, about 50 kilometres past Western Cape in South Africa. This picture was taken during a blue water baited shark dive.

Belgium (Brussels Morning Newspaper) The mako shark is listed as globally endangered on the International Union for Conservation of Nature (IUCN) Red List. Already in 2015, a study provided results indicating that most shark populations in the South Atlantic were depleted. This is mainly due to the species being heavily targeted for their fins. Because of their slow growth, late maturity and lengthy gestation period the mako sharks are extremely sensitive to overfishing.

There is also often a general lack of even the most basic management monitoring, control, and surveillance of the vessels operating in the South Atlantic. Data collection has practically ceased and figures are whether missing or reported very late. In the EU, Spain and Portugal are two of the biggest actors catching (or bycatching) this species.

The International Commission for the Conservation of Atlantic Tunas (ICCAT) oversees the conservation and management of a variety of Atlantic marine species, including tunas, swordfish, marlin and sharks. This is the forum where the member parties need to agree on strong measures to protect endangered species. Since 2017, ICCAT’s Standing Committee Research and Statistics (SCRS) has recommended to limit the mortality of shortfin mako (Isurus oxyrinchus) not only for the Northern stock but also for the Southern stock. Scientists have indeed been warning that this stock is very likely overfished and is probably on a similar trajectory as in the North. Over the last 30 years, the European Union has been one of the main catch actors of shortfin mako in the South Atlantic, thus having a central responsibility to ensure the long-term sustainability of fishing activities for this species.

After the 2021 ICCAT meeting, the European Commission acknowledged the agreement achieved on the conservation of shortfin mako in the North Atlantic, kick starting an ambitious rebuilding programme for this depleted stock. Concerning the stock in the South Atlantic, the Commission now calls for an implementation of a fishery management plan, mirroring what has been done for the North, starting in 2023 to counteract overfishing immediately and gradually achieve biomass levels sufficient to support maximum sustainable yield (MSY). In 2024, following the results of the South Atlantic shortfin mako stock assessment, Contracting Parties and Cooperating non-Contracting Parties, Entities or Fishing Entities (CPCs) shall agree on a catch level that counteracts overfishing and rebuilding the stock by 2070 with a probability of between 60 and 70% at least. The CPCs shall already “implement a prohibition on retaining on board, transhipping and landing, whole or in part, South Atlantic shortfin mako caught in association with ICCAT fisheries in 2023 and 2024 as a first step in rebuilding the stock”.

I hope the CPCs will follow the European Commission’s good proposals for this year’s ICCAT Commission meeting in November.