The importance of the Abraham Accords 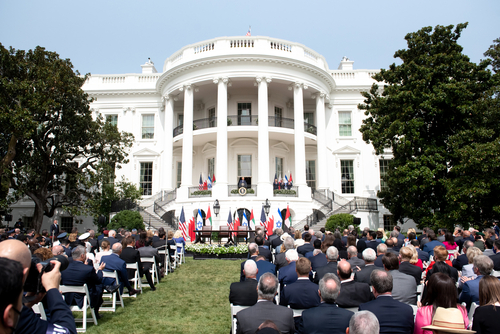 Washington DC, USA - September 15, 2020: A view of the South Lawn during the signing ceremony of the Abraham Accords between Israel, UAE and Bahrain at the White House in Washington, DC.

Athens (Brussels Morning) In October, the US Secretary of State, Antony Blinken had a series of meetings with his Israeli and United Arab Emirates counterparts to discuss the progress achieved on the so-called Abraham Accords as well as the issue of regional security.

The Abraham Accords were signed to foster mutual understanding, respect, co-existence, and a culture of peace between their societies in the spirit of their common ancestor, Abraham.

Some weeks after the leaders of Israel, the UAE, and Bahrain agreed on signing the Abraham Accords, a move widely seen as a diplomatic success for former President Donald Trump, Morocco and Sudan followed suit.

On 17 September, US Secretary of State Blinken held a virtual meeting with Israeli and Arab representatives aimed at encouraging more Arab countries to normalise relations with Israel and to celebrate the first anniversary of a sequence of agreements of diplomatic importance.

In the region, Palestinian officials underlined their disappointment and their sense of having been betrayed by their Arab brethren, given that they had reached deals with Israel without first prioritising progress toward the creation of a Palestinian state.

The US hopes to boost regional security

After the decision by the US and NATO to withdraw their troops from Afghanistan, a vacuum of power was to be expected, with regional hegemonies like the Islamic Republic of Iran and Turkey waiting to try and take advantage.

The current status quo in the Middle East, characterised by its endless conflicts, is unsustainable. In the circumstances, it was more or less inevitable that a new norm would appear in the Arab-Israeli conflict, one of the longest regional conflicts in recent history.

The historic component of the Abraham Accords offers infinite possibilities. The Biden administration agreed on developing a plan to sell 23 billion dollars worth of advanced weapons, including 50 state-of-the-art F-35 airplanes, to the UAE.

US experts have been quite vocal that the agreement has the potential to strengthen the anti-Iran axis in the region. The new partnership offers many advantages, starting from the simple fact that it should be of great benefit to all the parties involved. The Gulf States, in particular, would secure their critical infrastructure against Iranian threats by making use of Israeli’s advanced cyber capabilities and technology, while Israel would experience considerable economic growth having gained access to new lucrative markets for its cybersecurity firms and investors.

Washington realises that in order to deal with China, the US needs to limit its presence in Europe and the Middle East. Thus, it is crucial to US policy that a united front is created. The significance of the Israeli-Gulf “Iron Wall” against Iran is clearly reflected in the speed with which the relevant agreements are being signed and the absence of serious criticism from major regional media.

With an eye to the future, the US would also like to see the Water Security Strategy programmes’ of the Gulf States and Israel link up in a joint undertaking to tackle environmental and climate change issues. A startup ecosystem would focus on water cooperation, taking advantage of Israel’s pioneering status as a “startup nation.”

Taking the associated risks into consideration, the UAE had shown the confidence to lead the way by becoming the first Arab Gulf state to declare peace with its 70-year-old enemy. The Emirates were ready to sign the bilateral peace treaty and were just waiting for the right moment to go public. Similarly, for Israel and for most Arab Gulf states, the new relationship marks an outwardly expansive tactic.

Israel’s scientific and technological advances can contribute greatly to the post-oil economy of the Gulf States. Israel and the UAE have already strengthened their intergovernmental relationships and the ties between their commercial and educational entities. Through joint projects and ventures and by setting common goals within the region, they are making a clear statement about their mutual priorities.

In late May and early June, Israel and the UAE signed a tax treaty, Dubai hosted a Global Investment Forum with Israeli sponsors and high-profile Israeli speakers, and a Holocaust exhibition opened in Dubai.

Saudi Arabia and Qatar have quietly accepted the Accords, although neither is expected to sign them in the near future for differing reasons. The Saudi royal family does not want to provoke Riyad’s conservative political hub, while the Qataris are not willing to gamble on their longstanding relationship with the Palestinians. Nonetheless, the normalization agreements continue to show positive signs to a varying degree from country to country, even if, currently, it does not appear that there are any imminent new members lining up to join the club. What is clear, however, is that the experts and peace-brokers involved are confident that the deals are here to stay.