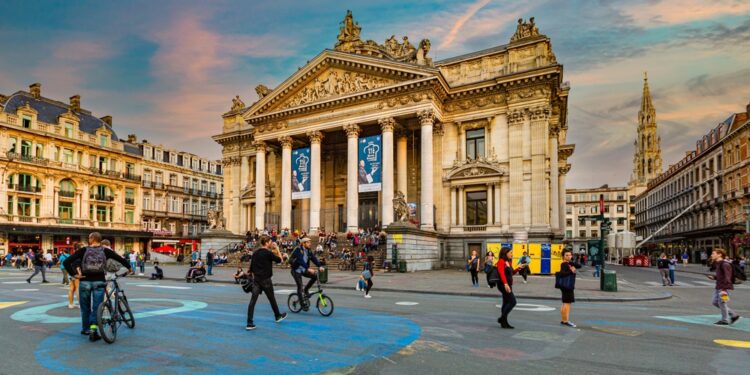 Brussels, (Brussels Morning)- The Region has issued the building permit for the renovation and extension of the former postal sorting centre at Brussels-South station, located on Avenue Fonsny. The complex is to become the home base of the NMBS headquarters. There was already considerable opposition to the size and height of the new part of the building. The municipality of Sint-Gillis had previously announced that it would appeal if the permit were granted.

The Urban.brussels regional administration has issued the permit for the work. “This  is the result of a long process involving an architectural competition and a lot of consultation. This renovation project will revive this site,” said competent State Secretary Pascal Smet (One.Brussels-Vooruit) in a press release.

“The NMBS has confirmed that it wants to keep its headquarters in Brussels,” said Prime Minister Rudi Vervoort (PS). “This permit is important for the future of the district. The station plays a strong historical and symbolic role. The resources for the urban renovation will be massively invested in the neighbourhood in the coming years to support and complement this project.”

The works should start in the coming months, says BRUZZ . If the municipality of Saint-Gilles does not file an appeal as it announced earlier. The municipality  previously issued negative advice against the new headquarters of the NMBS, because of the  size  of the new building, the reflective surface of the building and the commercial purposes.

However, the consultation committee gave a favourable opinion on the plans, subject to conditions. This was the last step before granting a building permit. In the event of an appeal, it is the Brussels government that must first decide on the appeal, which has a suspensive effect.

The construction of the new volume is part of a real estate deal in which the consortium Besix-BPC/BPI and Immobel is building the new headquarters in exchange for plots owned by the NMBS, especially on the Anderlecht side of the station.

According to Smet, the layout of the spaces and the flow at the entrances of the Brussels-South station will be improved. “The main entrance will be much more visible and accessible, and thanks to an additional access via a corridor that extends to Avenue Fonsny, travelers will have direct access to the platforms and a smoother flow of traffic.”

The way in which the station is connected to the neighbourhood will also be given a makeover. Commercial spaces will be built in the base of the building. The project includes the construction and refurbishment of the underpasses on the Fonsnylaan side. A large hotel with 230 rooms will also be built in the historic yellow brick buildings.

The project will contribute to the revival of Zuidwijk, promises Smet. “Besides a significant improvement of the immediate station environment, the project will also rebalance the functions of the neighbourhood with more public facilities, green spaces and housing. The new building will become a landmark in the Brussels cityscape, highlighting the presence of the station in a sober and contemporary way.”

With this project, all SNCB teams, which are currently spread over seven locations around the South Station, are brought together in one place, in a passive building with a surface area of ​​71,000 m². For example, the total space required for all SNCB services will be reduced by half, assuming that staff are not physically present half of the time.

The new building will house the essential functions for national rail traffic and will therefore become the nerve centre of real-time traffic management and railway safety.

Security and remediation work has recently started. The new building should be operational in the course of 2025, although the timing still depends on whether the permit will be appealed.