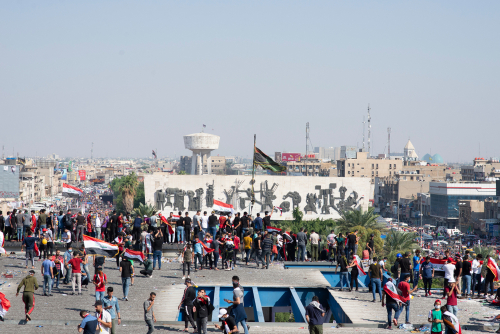 Speaking in Mosul on Sunday, he announced France would “bring back a consulate and schools,” urging religious communities in Iraq to rebuild the country by working together, according to RFI reporting.

Macron’s visit to Iraq comes one day after he announced at the regional summit in Baghdad that France would keep troops in Iraq to help in the fight against terrorism, irrespective of what the US decides to do.

Mosul was IS’ former stronghold in Iraq and was recaptured in 2017 from the jihadist group that held it for three years.

Macron said the rebuilding efforts in Mosul were progressing too slowly and visited the Church of Our Lady of the Hour in Mosul, which the UN Educational, Scientific and Cultural Organization (UNESCO) is looking to restore.

Paris finances French-speaking Christian schools in Iraq and the broader region, with Macron highlighting the plight of religious minorities during his visit to Iraq.

“This message is civilisational but also geopolitical,” he noted and added “there will be no balance in Iraq if there is no respect for these communities.”

Macron also visited the Great Mosque of al-Nuri, which the IS destroyed in 2017 and UNESCO is coordinating efforts to rebuild.

He visited Erbil, the capital of the Iraqi Kurdistan autonomous region, where he attended meetings with President of Kurdistan Region Nechirvan Barzani and his predecessor Masoud Barzani; he also visited French special forces in the region.

“I look forward to discuss bilateral ties, Iraqi elections and other pressing issues with President Macron,” Nechirvan Barzani noted and added “I remain grateful for France’s continued support to the Kurdistan Region and Iraq.”