Qatar’s reforms of labor laws have transformed the market 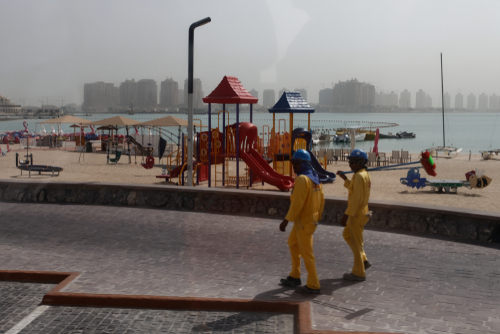 Belgium, (Brussels Morning Newspaper) The reforms to Qatar’s labor laws have “transformed” the country’s labour market with the new non-discriminatory minimum wage providing additional financial security. Qatar’s government recently has said that the new minimum wage law that came into effect, was one of the latest in a series of reforms the country has implemented in recent years.
Qatar’s treatment of migrant workers has been under the spotlight since it was awarded the hosting of football’s 2022 World Cup in 2010.

In the light of the developing events Brussels Morning spoke to the Italian politician Tiziana Beghin who is a Member of the European Parliament since 2014, and member of the Committee of the International Trade/Budget, and member of the Sport Intergroup about the current situation in Qatar regarding the reforms for migrant workers and labour, and about future prospects.

MEP Tiziana Beghin (T.B.) We are talking about a country whose workforce is for 95% migrants. Qatar took an important step forward mainly thanks to two reforms: the introduction of a minimum wage and the abolition of the kafala system, which legally linked the migrant worker to his employer and could prevent the worker from changing jobs or leaving the country. However, expectations have been partially disregarded since the new legislative system does not always find actual application in facts. The government should pay the utmost attention to this matter.

S.B.:Can we say that Qatar is going on the right route concerning the rights of migrant workers?

T.B.: Even the ILO, the U.N. agency specialized in labor and social policy issues, recognizes the improvement of working conditions, albeit still incomparable to Western countries’ standards. Therefore, I believe that the path taken is the right one, although the goal is still far away.

S.B.: What do you still ask Qatar to do to keep the reforms continue long after World Cup 2022?

T.B.: During an institutional visit to Qatar government representatives ensured that the reform process would not stop once the World Cup is finished and the spotlight has been turned off. The plan contemplates reforms until 2030 and should concern the safety conditions at work – the hundreds of white deaths in recent years testify to unacceptable standards – and women’s rights.

S.B.: Can reforms in Qatar considered a model for other countries?

T.B.: In the absolute sense, real models are other, but Qatar can certainly be taken as an example by those countries struggling to adapt to international standards.