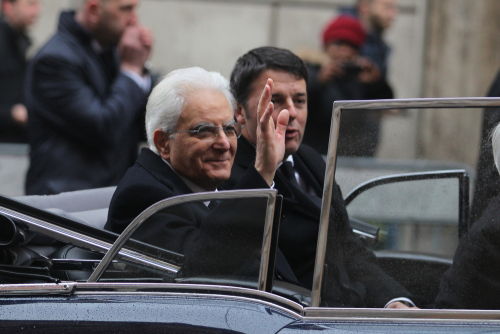 Belgium, (Brussels Morning Newspaper) Italy’s President Sergio Mattarella was re-elected on Saturday, despite his initial refusal to serve another term as head of state, having been persuaded by the heads of most of the country’s parliamentary parties to accept another seven-year term.

His election ends a brief period of political instability in Italy, which threatened to upend the delicate balance created after Mattarella’s nomination last year of former ECB Governor Mario Draghi for Prime Minister

While Draghi, a nonpartisan technocrat, came to enjoy near-universal backing of all the major parliamentary parties, the right and left blocs were unable to agree on a presidential candidate acceptable to both sides. As the vote increasingly shifted towards electing Draghi for president, analysts worried about the political and economic fallout should the parliament revert to bickering over the next PM candidate.

Since there is no formal candidacy process in the Italian presidential elections, the 1009 delegates eligible to choose the president are free to write the name of any qualified Italian citizen on their ballots.

This time around, the election process saw a lot of delegates – both parliamentary deputies and regional representatives – break party ranks and vote against the candidates put forward by their respective parties, which resulted in Mattarella’s name appearing with increasing frequency in each consecutive voting round.

Previously, Mattarella had announced that he had no intention of serving a second term. However, leaders of the major parliamentary parties approached him on Saturday, urging him to accept re-election, a move that was subsequently endorsed by Draghi, who likewise called on incumbent Mattarella to remain for another term.

Having stating he would accept a second term, Mattarella won 795 votes in the eighth round of elections on Saturday. The parliament burst into applause as soon as he passed the 505 votes threshold.

Draghi lauded his re-election as “splendid news for Italians”, and thanked the President for “deciding to go along with the extremely strong will of the parliament”.