The Verrewinkel cyclo-pedestrian bridge continues to be installed in Uccle 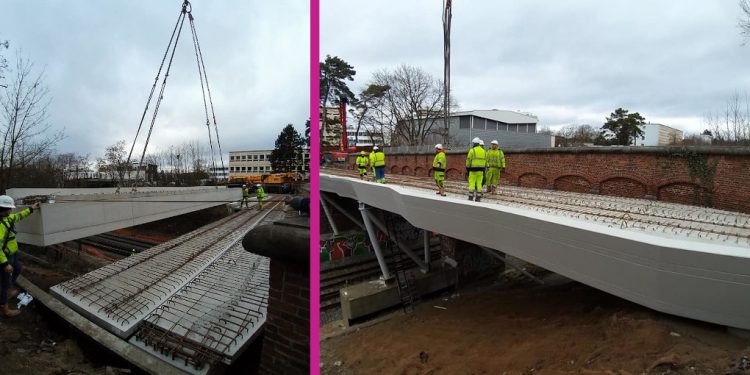 Belgium, (Brussels Morning Newspaper) The frame and deck of the footbridge have been laid in recent hours. Between now and May, a new cyclo-pedestrian footbridge will allow Ucclois to continue their journey on the rue de Verrewinkel bridge, above the railway tracks. The project started in February 2021 and has continued in recent hours with the installation of the frame and the deck.

“The work began in February 2021, and has been stretched out since then, as certain operations can only take place during interruptions to rail traffic. As soon as there is an interruption within the framework of another construction site, our contractor quickly moves forward and takes an additional step. For a year, there has been earthworks, laying of the foundations, stabilization of the embankments, laying of the piles”, explains Thibaud Wyngaard (Ecolo), first alderman in Uccle and in charge of mobility in a report by BX1 News .“ This weekend was a particularly important step”.

All in a faster than expected timing: “It was planned that the construction site would last all weekend, but it is already finished, and the street has just been reopened to traffic”, indicates the alderman. Because to allow the construction site this weekend, car traffic has been interrupted since Friday 11 p.m. (until Sunday 7 a.m., according to the hours communicated on Friday).

The end of the work in the spring

In March, it will be the turn of the guardrail to be placed, before the end of the work scheduled for May 2022.

“Currently, the bridge is extremely narrow, to the point that car traffic can only go one way and then another in an alternating flow. There is no sidewalk, no safe path for pedestrians and cyclists. It’s not reassuring: the objective of the footbridge is therefore to offer a more comfortable and secure path, in particular for the pupils of the neighboring French Lycée ” explains Thibaud Wyngaard.

The project is entirely financed by Beliris.