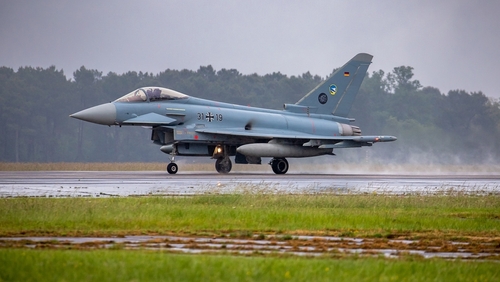 Speaking at the ILA Berlin Air Show trade fair, MTU Chief Program Officer Michael Schreyoegg said the company is prepared to supply spare parts and is hoping for “at least a maintenance deal” as Luftwaffe acquires a fleet of 35 new fifth-generation stealth fighters.

Lockheed Martin representatives announced during the trade fair that first F-35 units could be delivered to Germany as soon as 2026, depending on the outcome of current negotiations with the German federal government. Germany’s fleet of Tornado fighter jets is slated for retirement between 2025 and 2030.

Lockheed Martin’s vice president of F-35 business development J.R. McDonald told the media that there are more German companies, apart from MTU, which are currently exploring how they could become involved in the weapons trade deal – either by supplying parts or by providing maintenance.

German Chancellor Olaf Scholz announced in February that Berlin would boost its military spending by 100 billion euro, reacting to the geopolitical shift created by the Russian invasion of Ukraine. The German Bundeswehr, suffering decades of neglect after the fall of the Berlin Wall, was no longer fit for the task of guaranteeing German sovereignty, while its soldiers on peacekeeping missions around the world were often targets of ridicule over obsolete and inadequate equipment.

Procurement of fifth generation fighter jets from the US solved a burning problem for Luftwaffe, which is required to operate a number of nuclear-weapon certified military jets as part of the NATO nuclear-sharing agreement. The venerable Panavia Tornado is currently the only aircraft in its inventory that can fulfil such a role, but it will have to be retired before the EU military aviation industry will be ready to offer a replacement.

Europe is currently working on a sixth-generation fighter jet, a so-called “system of systems” currently named FCAS, which would see multiple European military contractors participating on its development and production. Germany’s MTU is expected to be one of the key subcontractors on the project, as the main partner in engine development to the French Safran group.

With the first FCAS jets expected no earlier than 2040, procurement of US-made F-35 jets has caused some concerns among European – and particularly German manufacturers, who fear that FCAS could be postponed or cancelled as a consequence of German F-35 purchase, or at least that Germany might drop out of the project, which would be a serious blow for MTU.

The German engine manufacturer hopes its civilian engine partnership with F-35 engine supplier Pratt & Whitney could secure it a contract with the Luftwaffe for maintenance and possibly even spare parts supply for the US jet’s P&W F135 turbofan jet engines.

MTU still stands to profit from the Luftwaffe overhaul, which will also include procurement of a number of new Eurofighter Typhoon multirole fighter jets converted for electronics warfare roles, which are intended to replace the electronic warfare Tornado ECR variants. Germany currently has a fleet of around 24 Tornado ECRs, while dpa reported that the Luftwaffe is planning to purchase at least 15 new Eurofighters refitted for EW role.

The Eurofighters are all fitted out with EJ200 engines, manufactured by EuroJet Turbo, a joint-venture  consortium headquartered in Germany, owned by the British Rolls Royce, Italy’s Avio, Spanish ITP and MTU Aero Engines.