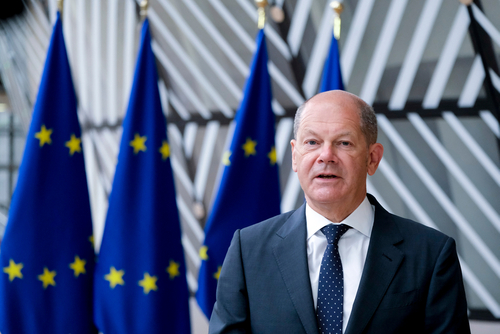 Belgium (Brussels Morning Newspaper) In a surprising break with Germany’s post-war tradition, Chancellor Olaf Scholz announced on Sunday that Germany is to significantly increase its military spending, starting with an additional 100 billion euro investment in military this year.

Scholz’s announcement comes a day after Germany ended its decades-long policy of not delivering weapons to conflict zones when Berlin announced that it plans to deliver 1,000 anti-tank missiles and 500 anti-air missiles to Ukrainian forces, and that it would allow other countries to supply Ukraine with weapons originally procured from Germany.

On Sunday, Scholz told the Bundestag that the Russian invasion of Ukraine represented “a turning point in the history” of Europe, arguing that it become clear that Germany now needs to invest significantly more in its security, “in order to protect our freedom and our democracy”.

The German Chancellor said the government had decided to supply an additional 100 billion euro for military investments in 2022, more than double the country’s 2021 defence budget of 47 billion euro. He also pledged to raise the country’s annual defence spending to 2% of its gross domestic product – more than 70 billion euro, a NATO requirement Berlin had ignored for years.

“We need planes that fly, ships that sail, and soldiers who are optimally equipped for their mission”, Scholz declared. The German army – Bundeswehr – has struggled for years with financial and equipment shortages. Earlier this week, its top officer, General Alfons Mais, said that the army was “more or less bare”.

Scholz also noted that Germany could purchase US-made F-35 fighter jets as a stopgap measure, to replace the country’s ageing Tornado fighters – the only aircraft in the German inventory currently capable of delivering US-provided nuclear weapons.

Despite plans to purchase US planes, Scholz also stressed Germany’s commitment to the European planned Future Combat Air System (FCAS), designed in a partnership between Europe’s Airbus, France’s Dassault, Thales and Safran groups, Spain’s Indra Sistemas and Germany’s MTU Aero Engines. “The next generation of fighter jets and tanks must be built in Europe jointly with European partners, particularly with France”, Scholz said.