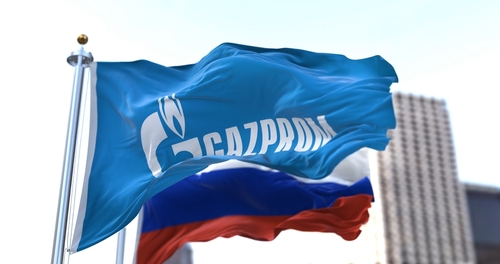 Moscow, RUS, February 2022: Flag with the Gazprom logo waving in the wind with the flag of Russia in the background. Gazprom is a Russian majority state-owned multinational energy corporation

Engie CEO Catherine MacGregor noted that the two companies agreed on a solution that is in line with EU sanctions and both companies’ expectations, according to Reuters reporting on Tuesday.

Engie did not say whether it opened an account with Gazprombank, which Moscow proposed as a solution to pay for natural gas in roubles without violating EU sanctions imposed on Russia.

The EC noted in the guidance that opening accounts with Gazprombank is allowed and stressed that payments for gas must be made in currencies agreed in contracts.

The body added that transactions must be completed upon payment in those currencies, rather than after conversion to roubles.

Engie pointed out in a statement that it is diversifying its supply and stressed that it cut its exposure to Gazprom to roughly 5 TWh at the end of Q1 in contrast with the maximum of approximately 15 TWh.

Italy covered roughly 40% of its natural gas needs with Russian imports last year and is looking for alternative suppliers.

Italian energy company Eni plans to open bank accounts to pay for Russian natural gas, noting that the move is in line with EC guidance, according to two sources.

One of the sources stressed that EC’s clarification on Friday gave “a green light for Eni,” while the other source pointed out that the guidance assured Eni its plan was in line with EU rules.

Eni’s German counterpart RWE announced earlier this week that it opened an account in Russia to pay for natural gas, stressing that it will make the payments in euro.

Moscow proposed a new payment system after the EU imposed sanctions on Russia over the war in Ukraine.

Under the new payment system, Gazprom’s buyers have to open accounts with Gazprombank and pay for gas in currencies agreed in contracts, after which the bank converts the payments to roubles and transfers the money to Gazprom.

Tags: Main-Sliderpayment scheme with Gazprom
No Result
View All Result