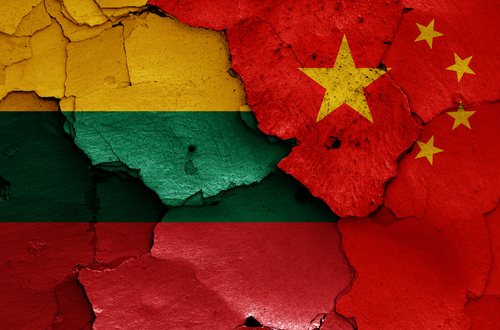 flags of Lithuania and China painted on cracked wall

Brussels (Brussels Morning) Some of Germany’s largest companies have urged Lithuanian politicians to ease tensions with China or risk a corporate exodus, according to involved insiders.

The Baltic EU member state has come under pressure from large companies in Germany to make concessions to China, Reuters reports.

Lithuania riled China by allowing Taiwan to open a de facto embassy in its capital Vilnius, whereas Beijing considers Taiwan to be one of its provinces. The Chinese Communist Party has brought pressure to bear on international companies to cut their ties with Lithuania or else face losing access to the Chinese market.

European officials are struggling to defuse the situation that has increased tensions between the EU and China.

Many multinational companies want access to the Chinese market, but the German automobile industry is especially affected since China is Germany’s main export market.

The German-Baltic Chamber of Commerce sent letters to the Lithuanian government noting that the sale of Lithuanian products to China has stopped, while pointing out that some companies could be forced to leave.

It urged Lithuania’s Ministries of Foreign Affairs and Economy to find a “constructive solution” with China, drawing attention to the fact that “the basic business model of the companies is in question” and that some “will have no other choice than to shut down production in Lithuania.”

Lithuania’s Prime Minister Ingrida Šimonytė met last week with company representatives to hear their concerns, according to one participant.

According to the source, the harm to the industry is measured in hundreds of millions of euro, a figure she was told would continue to grow until the dispute is resolved.

Valdis Dombrovskis, Executive Vice President of the EC for an Economy that Works for People, is reportedly trying to mediate between Lithuania and China.

In Beijing, the Ministry of Foreign Affairs issued a statement accusing the Lithuanian government of betraying “China’s trust”, while also saying that “for China-Lithuania relations to get back on track, Lithuania must first correct its attitude and take practical actions to correct its mistakes.”

The ministry insists that China is not putting economic pressure on Lithuania.

The EC has pointed out that it is trying to resolve the situation with Beijing, with a spokesperson stressing “we stand by Lithuania… we will not hesitate to act to defend our rights.”