by Klemen Grošelj MEP
in Opinion 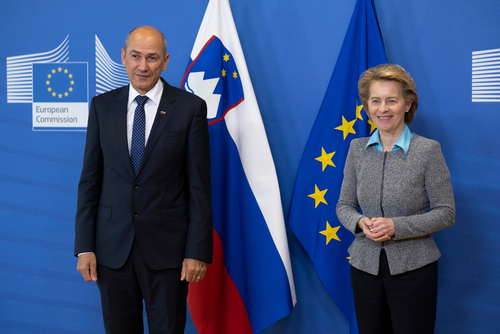 Brussels (Brussels Morning) On July 1st, Slovenia took over the rotating Presidency of the Council of the EU. It is our second presidency, but this one coincides with the 30th anniversary of our statehood and independence. The main doubt that has been cast on this Slovenian presidency is: what kind of presidency will it be? The bumpy start reflected in the visit of the Commission and the presentation of the priorities in the European Parliament didn’t help to calm down fears that this will not be as traditional presidency as we’ve been accustomed to.  Will this be a new kind of presidency, possibly an illiberal one?

The presidency’s list of priorities were presented in the past few weeks in the committees of the European Parliament and they are without any doubt all relevant. The post-pandemic recovery of Member States and of the Union as a whole is unquestionably a top priority.

Even with the dark shadow of a possible new wave of infections looming just around the corner, the national recovery and resilience plans are certainly a cornerstone of the EU’s recovery. Strengthening EU health systems and future resilience in health-related issues is another urgent priority.

Digitalisation, green transition and cybersecurity are additional issues of great relevance at EU level and the Conference on the Future of Europe is very important to all Europeans. Even the controversial issue of the European way of life, raised by PM Janša in Strasbourg, if done in the spirit of and based upon the EU’s fundamental values, can be a relevant topic of discussion, at least certainly within the framework of the Conference on the Future of Europe.

And this brings us to the main cause of the concern. Will the Slovenian presidency implement its priorities in accordance with the values and ideas on which the EU is founded, or will it pursue its own ideological agenda of sovereigntist and populistic illiberalism in defiance of the EU’s fundamental values as seen in Poland and Hungary, or in PM Janša’s domestic politics?

The language used by EU officials puts Slovenia more and more often in the company of Poland and Hungary. The Slovenian government policy of financial suppression of the independent Slovenian Press Agency in defiance of the law is a stark example of the growing concerns related to media freedom in Slovenia.

Attacks on journalists, even by the PM himself in the most brutal, Trumpist fashion, are also part of the same policy pattern. We therefore cannot speak of isolated cases, as this is an official policy of the Slovenian government, a government that currently sits at the helm of the EU Council.

The next crucial issue is the appointment of delegated prosecutors to the EPPO. Even though the Commission’s main concern is the fact that the Slovenian government failed to appoint two prosecutors, in reality the main point is that the Slovenian government interfered in the ongoing appointment procedure without legal foundation, causing not only the resignation of the Minister of Justice, but also the resignation of the State Secretary in the same ministry a few days ago. The State Secretary resigned, claiming that in the ministry there were no conditions for him to work professionally in respect of the basic principles of the rule of law and legality.

The main question is thus not the appointment itself, but whether it is done in a legal way and/or whether the candidate will fit the PM’s personal expectations and criteria. As it becomes ever more evident by the events at the Slovenian Ministry of Justice, the government, with shaky legal foundations, has already refused previously-selected candidates simply because the PM did not like them. This is what should concern the Commission and the EU the most, bearing in mind that this is the government which took over the Presidency of the Council of the EU just a few weeks ago.

So overall what can be said about the Slovenian presidency of the Council of the EU? It is unquestionable that its priorities are relevant, but the real question is in which way and with which legal and ideological foundations these priorities are going to be pursued. Will it be in the same way as any other Presidency in the past, in line with the values and principles on which the EU is based, or it will be in a new, illiberal way, turning the Slovenian presidency into the first illiberal Presidency of the Council of the EU? Only time will tell.