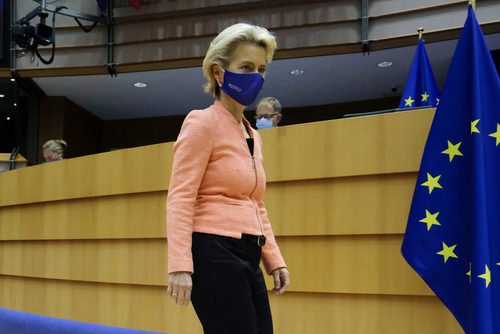 Von der Leyen recalled how she had “fought to have the first ever gender-balanced College of Commissioners”. She went on to note that “all research and economic studies show that companies that embrace diversity are more successful”, according to a press release issued Wednesday.

“It has been ten years since the Commission proposed to set a target of 40% for women on boards of publicly-listed European firms”, she said, citing how EC efforts to introduce sex-based hiring practices across the EU have been blocked for a decade.

Voluntary measures had failed to bring “the change we need”, she said, while insisting that the EC wants more women on the boards of large companies.

Close to 50% of EU member states have sex-based hiring quotas, she noted, yet a “glass ceiling” prevents women from reaching top positions in companies.

“If we look beyond boards, at the top leadership positions, just 7% of the largest European companies are led by a woman”. The EC President said she firmly believed that “as more diverse boards hire more diverse CEOs those, in turn, hire more diverse managers.”

Saying she was dissatisfied with the rate at which “we are making progress”, von der Leyen demanded that EU member states had to make a far greater effort to push women to top positions. “We need to do much more” she stressed because “when change does not happen naturally, regulatory action is needed.”

Regulatory pressure works, she said. “The numbers speak for themselves”, she declared, as she announced plans to continue to push for sex-based hiring policies in her capacity as head of the Commission.

Von der Leyen promised to “ensure that our proposal on Women on Boards becomes EU law.” Already, she had met with MEPs and member state representatives. She was “confident that soon we will see progress” because clearly “we cannot afford to lose another ten years.”