Fedasil demands structural solutions for the situation at Klein Kasteeltje 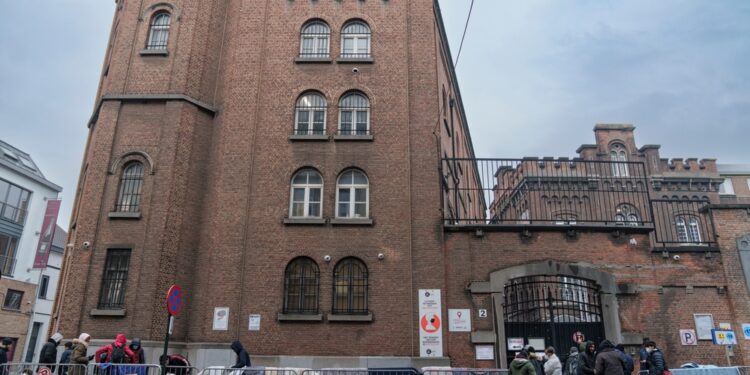 Brussels, (Brussels Morning)- During a symbolic action on thursday, the entire Fedasil staff stopped work for half an hour out of dissatisfaction with the situation at the application centre Klein Kasteeltje. “We wonder with families: where should we put these people?”

The scenario that takes place daily at Klein Kasteeltje is now known. Refugees, vulnerable people, single women and unaccompanied minors can usually count on bed, bath and bread, while the majority of single men who spend the night at the gates of the Fedasil centre encounter a njet, which is also against the international wrong – Fedasil has been convicted more than a thousand times, says BRUZZ.

The chaotic situation leads to skirmishes and pushing and pulling on a daily basis. On Tuesday morning, the police had to intervene and the registration was stopped early. Meanwhile, new shelters, such as in the barracks in Berlaar, seem no more than a drop in the ocean.

“I’ve never experienced this before,” sighs Isabelle Plumat, director of Klein Kasteeltje. The deteriorating situation at the application centre forced the director and the various Fedasil heads of service on Tuesday to launch a spontaneous solidarity action, which was not only carried out on the canal in Brussels, but also in the 36 reception centres.

“Police presence has become indispensable here and that is not normal. People can no longer get in and that results in difficult situations, resulting in a lot of frustration. In addition, certain medical needs of asylum seekers are not met.”

Insecurity, a record number of sleeping people at Klein Kasteeltje, staff shortages, a high influx coupled with an outflow that is too low, lengthy files, … these are ingredients for a toxic cocktail that sooner or later had to explode.

“The idea for the campaign arose this morning, but of course the seeds were planted a long time ago,” says Nils Baetens, head of service at Fedasil headquarters. Due to the accumulating turbulent registrations, the safety of both the asylum seekers and the staff was increasingly jeopardised, he says.

“We have been through a lot and the boundaries have been pushed many times, but now that security is at risk, we say clearly: no pasarán . Now that the registrations are happening on the street side, only one person has to push or pull two metres from the track, or a drama ensues.”

The focus must urgently shift from temporary to structural solutions, says Baetens. “What we are experiencing now is unprecedented. People invariably talk about a reception problem, but this is a system problem.”

“We look at the influx, at who is at the door today. But in fact it mainly concerns the entire chain behind it, with procedures that take a very long time and lead to very long waiting times for asylum seekers, so that there are no free places, and that creates dissatisfaction among the asylum seekers. These people want to move on with their lives, but are stuck in extremely long waiting times, which means that the number of people in shelters continues to grow. And the outflow must also be faster.”

Creating new places is therefore only part of the answer, according to Baetens. “Asylum services must be strengthened and efforts must be made to improve cooperation, but there are no ready-made answers to this problem at the moment. We cannot predict the influx. Neighbouring countries are in the same boat, by the way.”

There is also enough for an employee of the influx dispatching, who wishes to remain anonymous. Asylum seekers are screened at its service in the application centre, among other things. For people who apply for asylum, the dispatching is the next stop after a visit to the Immigration Department.

“We actually warned about this situation a year and a half ago,” she says. “It has long been indicated that there is a huge shortage of reception places. A year ago it became really problematic, because then we had to refuse war refugees who made their first asylum application. But now we often ask ourselves in families: where should we put these people?”

The employee has seen that threshold come closer and closer in recent months, again partly due to the blocked flow, she says. “It gets more and more out of hand. So far we have been able to find emergency solutions for those families, partly thanks to some closing days in the past month. But that won’t last.”

The Fedasil employee therefore insists on structural relief. “It makes no sense to open temporary shelters because the influx is high and to close them again once the number of new people is somewhat under control.”

The dire situation also leads to layoffs. For example, intake manager Clémentine Devaux will soon have to say goodbye to six employees. “They don’t want to continue working in such a stressful climate,” it sounds in Le Soir .

Meanwhile, State Secretary for Asylum and Migration Nicole de Moor (CD&V) informed Belga that she would convene Fedasil’s management. “I fully understand the staff and that they express their concerns. All services sit together to come up with operational solutions on the ground in collaboration with the city of Brussels,” she says.