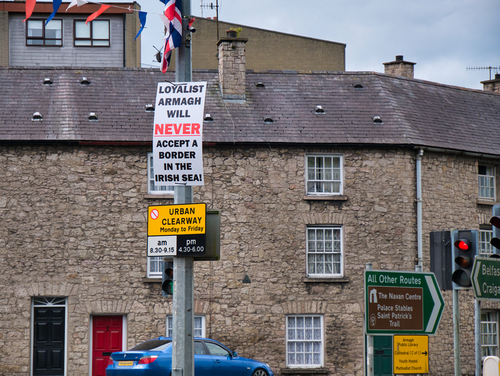 Brussels (Brussels Morning) The EU is not willing to reopen negotiations on the Brexit agreement’s Northern Ireland Protocol, despite calls from London to do so and indirect threats that otherwise Britain could ignore the Protocol’s provisions.

On Wednesday, Britain’s chief negotiator with the EU, David Frost, called for a rework of the Protocol, insisting that in its current form, the agreement is unsustainable. He said London would be justified in invoking Article 16 of the agreement, which enables either party to take unilateral action if the Protocol leads to unexpected economic, societal or environmental problems.

Claiming the conditions exist for Britain to unilaterally ignore parts of the Protocol, Frost said the UK is seeking a new approach to the agreement, which would involve reworking the Protocol’s trade provisions, and that London would seek to exclude the European Court of Justice (ECJ) as the ultimate arbiter in the application of the agreement.

Brussels’ chief negotiator with the UK, European Commission Vice President, Maroš Šefčovič, immediately dismissed calls for significant changes to the Protocol, insisting that the EU will not agree to a renegotiation. Šefčovič, who previously called on Britain to consider a Swiss-style deal as a possible solution, noted that the EU will remain open to “creative solutions”, provided they remain within the framework of the existing Protocol.

The Protocol was originally the end result of the prolonged negotiations between the UK and the EU regarding the future status of Northern Ireland, the goal being to avoid establishing a hard border on the island of Ireland.

Because membership in the EU single market or customs union was a red line for British negotiators, the special Protocol was introduced to preserve the 1998 Belfast Good Friday Agreement. The intention was to effectively keep the British province within the EU single market, while moving the necessary veterinary and other customs checks to the Irish Sea.

However, this solution has proved to be problematic both for retailers in Northern Ireland, which face increasing difficulties with importing goods from mainland Britain, as well as for loyalist paramilitaries, which indirectly threaten a resurgence of sectarian conflict on the island, fearing that the Protocol is pushing the province closer to reunification with the Republic of Ireland.