by Stella Athanasoulia
in Parliament 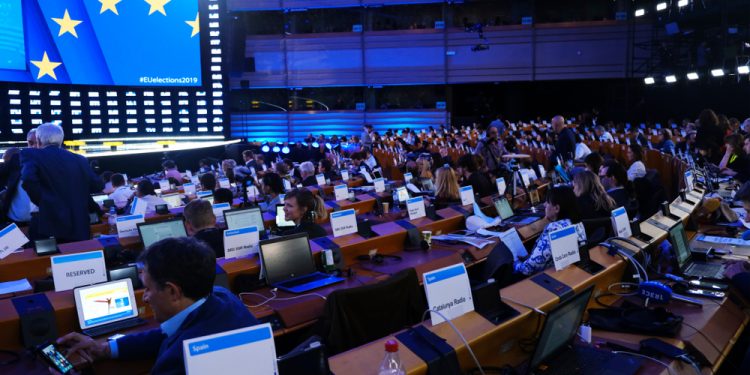 Brussels, Belgium. 26th May 2019. Interior view of i the European Parliament during the night of EU elections.

Brussels (Brussels Morning) MEPs have call for a “unified and resolute” response to Egypt’s crackdown of human rights activists, journalists and academics.

The European Parliament has adopted a resolution on Friday calling for more scrutiny over the relations between EU institutions and the Egyptian authorities in view of the country’s deteriorating human rights situation.

The motion, presented by a number of MEPs on behalf of the Renew Europe Group (the former Alliance of Liberals and Democrats-ALDE), sought to recall the EU’s commitment protecting human rights in particular with regards to the case of the Egyptian Initiative for Personal Rights (EIPR) activists, targeted by the authorities since 2016.

The resolution called for “a profound and comprehensive review of the EU’s relations with Egypt” and for more transparency “on all forms of financial support or training provided by the EU, the European Bank for Reconstruction and Development and the European Investment Bank”.

More specifically, the resolution deplores again “the continuing and intensifying crackdown on fundamental rights and on human rights defenders” and reminds the Egyptian authorities that respect for human rights constitutes an essential element of EU-Egypt relations.

It adds that providing space to civil society is a “joint commitment enshrined in the EU-Egypt Partnership Priorities”, and expresses its deep concern for the fate of detainees and prisoners held in overcrowded places of detention, in abysmal conditions during the Covid-19 pandemic”.

Human rights activists and researchers are continuously targeted by the Egyptian authorities with arbitrary detentions, beatings, sexual assault and electrocutions.

According to Amnesty International, in October and November alone, the Egyptian authorities executed at least 57 men and women, nearly double the recorded 32 people they executed throughout 2019. In a chilling report, Amnesty reiterates the call for action against what it called “the Egyptian authorities trampling on the right to life in shocking disregard for their obligations under international law”.

In recent months, numerous EIPR activists have been arrested and charged with terrorism and national security-related offences. In early November, three EIPR activists were detained following a meeting with ambassadors and diplomats, while Patrick George Zaki, an EIPR gender rights researcher and postgraduate Erasmus student at the University of Bologna, was arbitrarily arrested at Cairo International Airport in February.

According to his lawyer, he was subjected to a 17-hour interrogation, beaten and tortured with electric shocks before being charged with disseminating subversive propaganda, incitement to protest and instigation to terrorism. While his health situation puts him at particular risk of contracting COVID-19 in Tora Prison, Zaki’s pre-trial detention has continuously been extended for the past 10 months.

Furthermore, the resolution stressed that cooperation in the areas of migration management or counter-terrorism and geopolitical considerations should not come at the expense of continued pressure for human rights compliance and accountability for human rights abuses.

The resolution considers that Egypt’s human rights situation requires a serious revision of the Commission’s budget support operations and recalls that the EU and its member states must not give awards to leaders responsible for human rights violations.

Last week, two prominent Italian citizens returned their Legion of Honor awards to France to protest that Egyptian President Abdel-Fattah el-Sissi was given the prize despite his government’s human rights abuses, the Associated Press reported. Corrado Augias, a journalist and former MEP, and Giovanna Melandri, former culture minister, announced they would be returning the distinction to the French Embassy in Rome in protest against Egypt’s continuous refusal to cooperate with the Italian authorities over the torture and murder of doctoral student Giulio Regeni in 2016.

The resolution further expressed the EU’s continuous support to the Regeni family, adding that “the search for the truth about the kidnapping, torture and murder of a European citizen does not belong to the family alone, but that it is an imperative duty for national and EU institutions that requires all necessary diplomatic actions to be taken”.

Tags: EgyptMain-Sliderreview of relations
No Result
View All Result