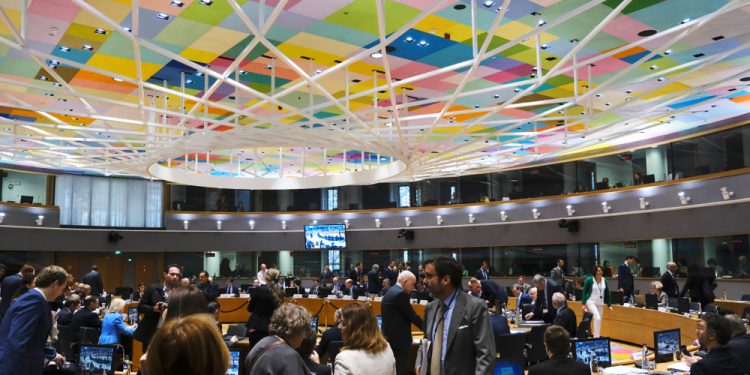 Brussels, Belgium. 17th May 2019. Meeting of EU economic and financial ministers at the European Council headquarters.

Brussels (Brussels Morning) EU ministers resume meetings this week with the eurozone’s finance ministers gathering by video link today Monday. Every country will come up with an overview of its spending priorities under the EU’s COVID recovery funds.

The national plans have to be approved by a two-third’s majority of EU governments and spending should go to improve digital infrastructure projects and also be targeted towards transitioning to a low-carbon economy.

Later in the afternoon, finance ministers will discuss prospects for monetary and financial dialogue with the United States together with Lawrence Summers, the former US Treasury Secretary and academic. The aim is for a wider use of the euro in the global economy to challenge the role of the dollar as global reserve currency.

Finance ministers from countries outside the eurozone will join in on Tuesday, when the Commission will present its proposals on tackling non-performing loans in the aftermath of the COVID-19 pandemic. Ministers will hold a policy debate on an action plan to that effect. The state of public finances in the EU countries is on the agenda for tomorrow’s meeting of the finance ministers.

On Thursday this week, EU heads of government will convene via videoconference to ponder the EU’s response to the corona pandemic and asses the epidemiological situation. EU Council President Charles Michel will take stock of the roll-out of available vaccines, but other tools to bring the spread of the virus under control are also up for discussion.

Europe is now three weeks into the various vaccination programmes launched by its member states, which are being hampered still by the scarce availability of the vaccines.

Next week, EU farming ministers will discuss both fishing opportunities and quota-sharing of fishing stocks with the UK. The future of the common agricultural policy is on the agenda, as well as the impact of the future trade agreements on agriculture in the EU.

Next week Monday, EU foreign ministers will convene to discuss recent developments, including the return of the Russian opposition leader Alexei Navalny to Moscow.