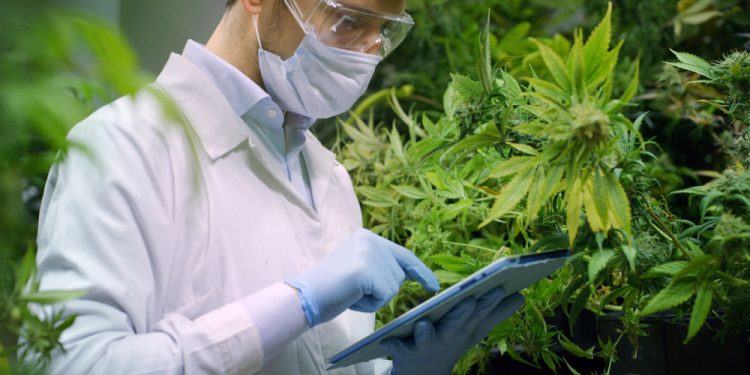 Portrait of scientist with mask and glasses checking and analizing hemp plants, signing the results with laptop in a greenhouse

To gain a better understanding of the obstacles involved, three professionals involved in this young market speak to Brussels Morning.

The first, Senator Pittella, from the Italian Democratic Party, has introduced a decriminalisation bill and sheds light on the potential social impact of cannabis legalisation.

The second is Antonella Soldo of the Meglio Legale campaign, who centralises stakeholders seeking a public fact-driven debate.

The third is Eugenio Carucci, of law firm CMS based in Rome who provides insight on the nitty gritty of the legalese impacting its growth.

Italy’s underground economy, according to official estimates, is the size of Portugal’s entire GDP. A staggering 211 billion euros, roughly 12% of Bel Paese’s economy; in 2014, it peaked at 14%.

Of course, these below-the-surface activities include the selling of narcotics banned by the state. These unrefined markets account for almost 15 billion euros with year-on-year growth of 3.5% (2015-2018). According to Sole24Ore, a properly functioning legal Italian cannabis market can be worth 30 billion euros by 2029.

There are implications for the state’s coffers as well from the surfacing of a sophisticated market. According to the University of Messina, the state would gain circa 6 billion euros from decriminalisation. Furthermore, the justice system, including prisons, would save 541 million euros and public safety 228 million euros.

Today’s subfraction, the legal Cannabidiol or CBD market, supports 10,000 jobs and is worth 150 million euros. During the first lockdown of 2020, there were as many sales as throughout the entirety of the financial year 2019, soaring to 300% of sales during April.

Italy is currently the second consumer in Europe, with at least 9% of Italians having tried the product, spiking up to 27.4% amongst millennials. It is favoured by a rich agricultural tradition and climate to sustain it. It is a top-caliber global tourist hub, attracting 96 million tourists in 2019, and located in Europe.

Across the pond, the US has developed a much more sophisticated market, with Forbes calling it “America’s hidden job boom”. Three hundred thousand people are employed full-time by this sector, adding a 44% increase in 2019 across the country, with a projected 35 billion dollar market size by 2025.

Yet, for Italy’s cannabis market to reach its economic potential and compete properly, Italians will have to undergo a public debate touching upon its social and legal dimensions, just as the Americans have.

Of old taboos and laws

Italy still feels the remnants of the 20 years of “duro e puro”, and the religiosity which permeates most policy discussions, rendering these topics often taboo.

In fact, “Despite the fact there are at least 6 million Italian cannabis consumers there never has been a proper discussion and public debate”, says Antonella Soldo, of the Meglio Legale campaign.

In her opinion, “To eliminate all taboos, there needs to be a new, inclusive narrative encompassing all of society and stakeholders: consumers, doctors, lawyers, journalists and parliamentarians. In order to properly address the topic, we need a sincere, factual discussion and a high degree of political accountability”.

Despite past anathemas, a bill has been introduced to decriminalise light narcotics by Senator Pittella (Disegno Legge S. 937).

“My proposal closely follows legislative frameworks of other EU member states and is founded on three cardinal points: (1) depenalisation of non-therapeutic personal consumption; (2) the emergence and non-marginalisation of consumers; and (3) judges would be able to mandate social service in lieu of pecuniary and prison terms”, the Honorable Pittella told Brussels Morning.

Hence, “the primary benefits would be social, but also economic. First and foremost, it would further the prevention of consumption. It would favor social inclusion, proportionality in consequences for offences committed, as counterposed to merely locking people up, and tossing the key.”

Furthermore, he continues, “it would permit for the opening of Cannabis Social Clubs, and permit associated growing, thus taking a further chunk of trade away from illicit markets”.

It would add much clarity to a convulse situation. According to Eugenio Carucci entrepreneurs face a contradictory legal situation today.

“Generally speaking, based on the plant properties, any hemp variety can either fall within the scope of Law No. 242/2016 and, therefore, its production and commercialisation is allowed for “industrial use” or, on the contrary, be included within the list of the Codified Law on Drugs and, consequently, its production and commercialisation will entail a criminal act”.

Furthermore, continues Carucci, “The Italian Supreme Court, controversially ruled in 2019 that these products do not fall within the scope of Law No. 242/2016 when they provide for doping effects. The Ministry of Health has further decreed it considers any cannabinoid-based product as illegal.”

Yet, this may change due to a recent ruling by the Court of Justice of the European Union (CJEU) this past November (C-663/18), in which the Court found that a member state may not prohibit the marketing of CBD lawfully produced in another member state.

For Carucci, this may lead to a reformist impetus in Italy. In fact, “we expect the Ministry of Health to launch a serious and conscious debate to proceed with a reformist approach and definitely withdraw the contested decree, which of course would risk being deemed unconstitutional for being in contrast with EU case law”.

As Bob Dylan would say, “the times, they are a-changing”.