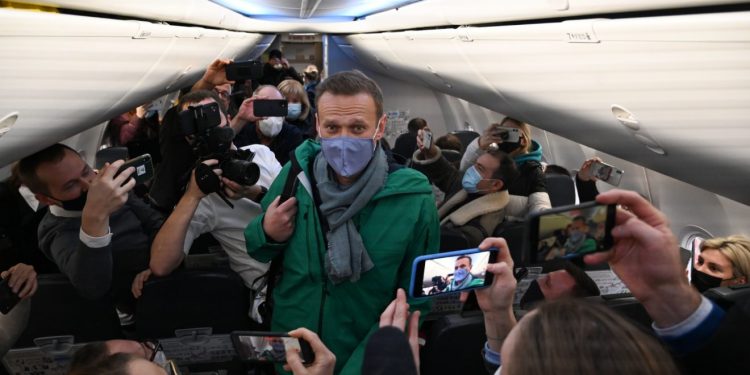 Last week, media revealed that Russia’s Justice Ministry had called on the judiciary to cancel the suspended sentence handed down to Navalny in 2014, which required him to report on a regular basis to the Moscow office of the Russian Federal Prison Service (FSIN).

When Navanly boarded the plane to Moscow on Sunday, it remained unclear as to whether the authorities would detain him immediately on disembarking. His supporters were gathered at the Vnukovo airport, where his flight was supposed to land. However, the plane was re-routed to Sheremetyevo airport at the last minute, the captain having cited “technical difficulties”.

Navalny was taken into custody at the immigration control point by four masked police officers, His lawyer, who had had travelled with him, was not allowed accompany him. It was reported today that Navalny is being held at a police precinct outside Moscow, where an improvised court hearing was held to determine whether he should remain in custody. Again, his lawyer was not present.

“I condemn the detention of Alexei Navalny by the Russian authorities,” von der Leyen tweeted. “They must immediately release him and ensure his safety. Detention of political opponents is against Russia’s international commitments.”

“Navalny’s case has received a foreign policy dimension artificially and without any foundation”,  Lavrov said, noting that his detention was a legal decision reached by Russian law enforcement agencies. “It’s a matter of observing the law,” he said.

The US and EU previously expanded sanctions against Russia for its suspected role in Navalny’s poisoning, after three independent laboratories confirmed that he had been poisoned with the illegal nerve agent Novichok, which is produced in Russia. The Kremlin has repeatedly rejected any responsibility and refuses to acknowledge that he was poisoned.