Brussels to get green ‘islands’ in the canal 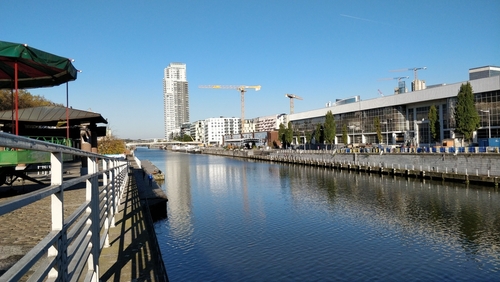 BRUSSELS, BELGIUM - 10 24 2021: View of the Brussels canal flowing beside the Centre Pompidou building and the Up-site residential tower

Brussels (Brussels Morning) Floating vegetated rafts over a length of 100 meters will be installed on the canal at the marina in the spring, with underwater cages underneath. These should improve water quality and biodiversity. If this produces good results, the project will be expanded afterwards.

This was announced by the Environment Minister Alain Maron (Ecolo), after a question in the Environment Committee of Member of Parliament Aurélie Czekalski (MR) about the feasibility study ordered last year for such vegetated ‘islands’.

“The study clearly shows that it is possible to float rafts with plantations on the canal”, said Minister Maron. “The study also identified several locations where this might be possible. The rafts and underwater cages will promote biodiversity as they create a habitat for fish, birds and insects to thrive and reproduce”.

The advantages of such ‘islands’ with vegetation are countless, experts say. Such overgrown rafts already exist in Paris and Kortrijk, among others. “They will improve the water quality because plants with a purifying effect will grow on them”, says Sylvain Godfroid, spokesman for the port.

In addition, the project also has an aesthetic advantage, as the rafts with vegetation make the view of the canal more pleasant.

The Port of Brussels will therefore start a pilot project at one location, expectedly in May 2022. If that first experience is positive, additional modules will be installed, in line with the pilot project or at other places on the canal.

Along the pontoon of the Brussels Royal Yacht Club, ‘islands’ planted with greenery will be constructed over a length of approximately 100 meters, with a total surface area of ​​approximately 220 square meters. Cages are hung under the rafts containing oyster shells, which must protect the associated underwater life and can act as a spawning area for fish.

After a year of state of affairs

The pilot project will receive a technical and ecological follow-up after one year, which will look at the strength of the rafts, anchor points and cages, and which species they accommodate. Exactly how many animals live on, in and around will also be counted. By the summer of 2023, this should help to decide whether the existing facilities will be expanded and other sites along the canal will also be designed in this way.

According to the minister, it is one of the largest European projects that combines both floating rafts and underwater cages, in order to contribute to the creation of complex ecosystems while also providing ecosystem services for spawning and breeding grounds.

According to Maron, the non-profit organization Canal it Up has already announced that they want to participate voluntarily in raising awareness about the project, collecting litter and light maintenance of the vegetation.

Tags: canal at the marinaEnvironment Committee of Member of Parliament Aurélie Czekalski (MR)Environment Minister Alain Maron (Ecolo)Floating vegetated rafts over a length of 100 meters
No Result
View All Result