by Helen Critchley
in Our pick 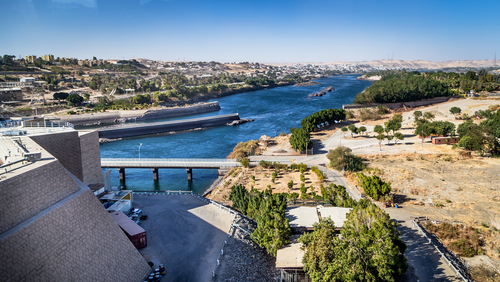 The Renaissance Dam, located close to the Ethiopian and Sudan border, has generated many clashes over the past decade between Ethiopia and the dam-opposing countries. For example, in 2020, Ethiopia accused Egypt of cyber-attacks to disrupt GERD construction, as reported in APA News.

Due to population growth and the rise in the severity of droughts, water has become both a sacred and scarce commodity, especially for the 300 million people that depend on the water of the Nile.

The GERD has a maximum capacity of 74 billion cubic metres of water, giving Ethiopia the superior control of life-changing amounts of water, in what has become the largest dam in Africa. While upstream Ethiopia focuses on using the gravity dam to provide cheap electricity to its people and to boost its economic development by exporting surplus electricity, its downstream neighbours need it for survival.

As much as 90% of the 100 million Egyptian citizens rely on the freshwater supply from the Nile River. On DW News, Randa Aboul Hosn, the Resident Representative for UN Development Program Egypt said, a “2% drop in water affects 1 million people” many of which are farmers or already live in poverty.

Egypt seeks a legally binding agreement, like that of the 1959 Sudan and Egypt Agreement, in which Egypt was guaranteed 55 billion cubic metres of water a year. That agreement didn´t consult Ethiopia. Ethiopia prefers an unbinding agreement, subject to change at their discretion. Despite multiple tripartite negotiations, including efforts by the African Union and the United States, every attempt to form an agreement has been ineffective.

However, Egypt has now joined forces with the Gulf States. At the launch of the Political Consultation Mechanism, December 12, Egypt’s Foreign Minister, Samah Shokry, confirmed that the GERD crisis was a topic of discussion with the GCC, according to a phone interview with Egyptian journalist Amr Adib. Additionally, Minister Shokry expressed a strong need for a binding contract in order “to preserve Egyptian water rights.”

Until this is resolved, Ethiopia continues to unilaterally fill its $5 billion reservoir – for the third year – to achieve its economic expansion, while Egypt desires a binding agreement to guarantee the safety of its people and culture.