Can Spain afford another tight lockdown? 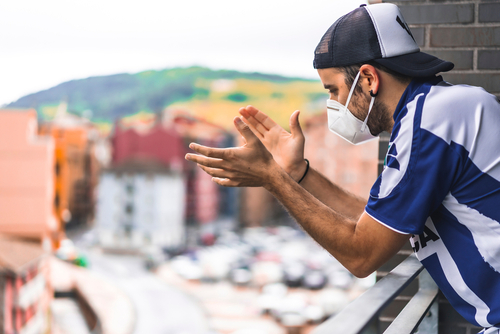 A young man in a mask and a blue and white shirt applauding the toilets on the balcony at 8 in the afternoon. Pandemic coronavirus in Spain

Brussels (Brussels Morning) After 5-years of economic growth and job creation, the pandemic hit Spain hard in 2020. Its first lockdown lasted 98-days, from March 2020, where residents were denied the right to leave their home for anything other than what the government deemed essential, it faced “one of the sharpest economic contractions in Europe” reported the European Department at the International Monetary Fund (IMF).

This strict lockdown later faced criticism and was acknowledged to be “unconstitutional” by the Constitutional Court.

With pressure from regional leaders, who impose restrictions over their autonomous communities, Spain´s President Pedro Sanchez has avoided further national lockdowns. Over the course of 2021, Spain has focused on a vaccination program, in the battle against coronavirus, and has achieved great success. 81% of its population has received at least one dose of the covid-19 vaccine. Our World in Data has reported that Spain is the fifth most successful country in the world for populace immunisation.

But despite these efforts, and a statement in November, “this Christmas will be better than last year” Sanchez has confirmed a meeting with regional leaders to “evaluate new measures that could be introduced in the coming weeks.” This comes in the wake of The Netherlands, France, the Republic of Ireland and Germany swiftly announcing new lockdown measures to fight the rise in new coronavirus cases, due to Omicron – discovered in South Africa, November 2021 – the latest “variant of concern” claims the World Health Organisation.

Concerns are high about another tight lockdown as “the economic impact of the pandemic has been enormous,” according to Alfred Kammer, Director of the European Department at the IMF. And the Organisation for Economic Co-Operation and Development (OECD), has already radically decreased Spain’s projected growth from 6.8% to 4.5% in 2021, and from 6.6% to 5.5% in 2022.

With a potential lockdown looming it appears that Spain who “relies on Europe more than any other country,” according to Emilio Ontiveros of Analistas Financieros Internacionales, for support to maintain a profitable tourist, retail and hospitality industry. It seems Spain won´t be bouncing back to pre-pandemic standards any time soon. Economy Minister Nadia Calviño believes it will take another two years, “in 2023, it [Spain] will return to the path of growth we had before the health crisis.”

While the light at the end of the tunnel may seem far away, Sanchez´s remarks at a recent conference in New York are hopeful. He said economic recovery was achievable because “we are stronger together” and one important factor is that it “is inclusive and equitable with no one being left behind.”