A Story Within a Story— (Within yet Another Story) 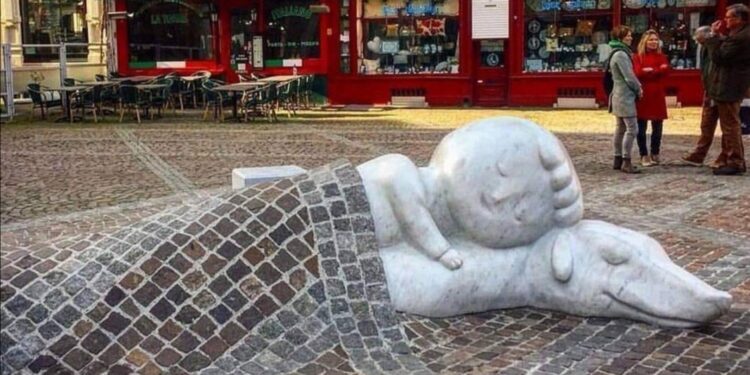 Belgium (Brussels Morning Newspaper) They were both orphans. He, a parentless boy from the Ardennes, and his dog, an abused stray found abandoned in a ditch outside of Antwerp. Their fictional story provides a snapshot into everyday 19th Century life centered around such Flemish iconic troupes like Peter Paul Rubens artwork and The Cathedral of Our Lady in Antwerp.  The story is a world-wide classic especially in Japan where millions upon millions have adopted the story as part of their culture.  Yet until very recently, the story has been somewhat unknown and underappreciated in Belgium. What follows is the multi-layer evolution of a 19th Century vignette that has had the unique ability to touch upon a myriad of human expressions and cultural values.

The Dog of Flanders was written by the British/French author Marie Louise de la Ramee (pen name Ouida) in 1872. It tells the story of young Nello whose mother died during his childbirth. He is taken in by his ailing grandfather who lives in a hut outside Antwerp. They are destitute but find it in their hearts to befriend an abused dog they named Patrasche. Nello and Patrasche became inseparable. Together they would pull a cart every day to Antwerp to sell milk for a few coins. There, Nello marveled at the artwork of Antwerp and longed to develop his artist skills. He was encouraged by his best friend Alois—the daughter of a wealthy landowner—but Nello was so penniless he cannot afford any artistic supplies. Nello, infatuated by Ruben’s The Raising of the Cross in the Cathedral, hopes to one day have the price of admission to view the famous painting. The boy’s life experience continually spirals downward as his grandfather dies, he is evicted from his hut and is falsely accused of arson. Nello and his ever-faithful dog Patrasche find themselves destitute on a snowy Christmas Eve. They made their way to the Antwerp Cathedral hoping for some warmth. Luckily the door is open and at last, Nello was able to gaze upon Rubens’s masterpiece. Tragically, the following morning Nello and Patrasche are found frozen to death, tightly hugging each other in front of the Cathedral. It is a profoundly devastating and grievous ending. Outside of Ouida’s narrative however, it is “the story within the story” that has taken on a destiny of its own.

Ouida wrote The Dog of Flanders (1872) after spending only a few days in Antwerp. It was published the next year but never reached the level of acclaim of some of her other works. It was distributed in the U.K. and the U.S.A. with little fanfare. In 1908 the book was noticed by Masujiro Honda, a Japanese diplomat assigned to a New York City post. He recognized the cultural impact Ouida’s work could have in Japanese culture. His instincts were correct. Mr. Honda sent a copy back to Japan where it was translated to Japanese. Exponentially, and now 110 years later, The Dog in Flanders has found its way deep into the Japanese psyche. It has been a children’s classic for over a century and is required reading in most Japanese schools. It is considered the best-known children’s book in Japan. In the 1970’s, Japanese television ran an animated ,52-episode series that was watched by over 32 million viewers (you read that correctly!). Many Japanese can sing the movie’s theme song by heart—in Dutch! Cultural observers believe Nello resonates to the Japanese as an example of a western samurai: brave, dignified, and selfless who dies with nobility in service to a higher ideal. Patrasche is viewed as a symbol of loyalty, devotion, and duty to one’s master—values which are esteemed in Japanese culture.

Although The Dog of Flanders has achieved cult-like status in Japan, the story until very recently, has been relatively obscure and unknown in Belgium. In fact, very few Belgians had even heard of the story until the 1980’s. In 1982 a young man named Jan Corteel—a tourist office worker – had noticed more than a few Japanese tourists visiting Antwerp inquiring about a “boy, a cathedral and more about the dog story.” Statistics showed that over 22,000 Japanese nationals had recently visited Antwerp. Jan became curious and decided to do his homework. He found an old English copy in the library. The book was so unknown it had only been checked out (5) times in the last century. He read the book over and over, researched the background using Japanese sources and, over time, became versed enough to explain the appeal of the story in his own country. By 1985 he was able to have The Dog of Flanders published in Dutch. In the book’s forward Corteel wrote: “The story has been Belgian’s secret ambassador to Japan. It has traveled around the world for 100 years.”  Ultimately thanks to his efforts, Jan Corteel succeeded in bringing the story to Belgian national television. Since 2000, it has often been shown Sunday evenings and on Christmas Eve.

But the many iterations of The Dog of Flanders do not end with Jan Corteel. Most recently in 2016, the Flemish artist Batiste Vermeulen sculpted The Story of Friendship on a cobbled stoned square in front of Antwerp’s Cathedral of Our Lady. This sculpture is a celebration of friendship with the two orphans covered by the blanket which provides them with “protection from the harsh world”. Vermeulen stipulated that no fence or barrier surround the piece wanting it to be “an image that people can lean on and that children can play on.” The public has embraced the sculpture as it is fast becoming another “must see” while visiting Antwerp. However, many Japanese visitors, for reasons which are very hard to explain, have stopped visiting the site. There seems to be very sensitive political story developing behind the new sculpture. Evidently some Chinese organizations have made financial contributions to the artwork and many Japanese consider this as “co-opting part of their culture.” As of this writing, Antwerp officials are open and curious to see how this “cultural appropriation” plays out.

From Ouida’s authorship in 1873, to Masujiro Honda’s discovery in 1908 and Japan’s subsequent 100-year cultural approbation, to Jan Corteel’s recognition and now to a developing controversy, it is safe to say that The Dog of Flanders has many layers. This small book, like few others, has had the ability to touch upon so many intercultural values. The Dog of Flanders continues to have a developing worldwide impact. Stay tuned!