Howard! …We Need You! 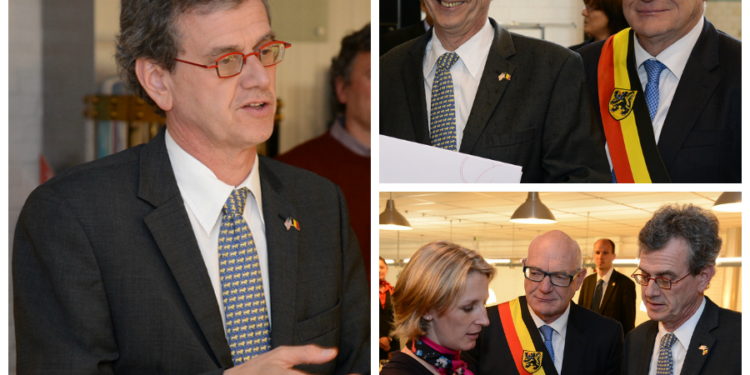 Belgium (Brussels Morning Newspaper) Retired American Ambassador to Belgium (2009-13) Howard Gutman was and continues to be, a Renaissance man. Perhaps not in a Leonardo di Vinci type of way but in his own multi-dimensional way that brought passion, energy, and creativity to his job. According to the 2013 Gallop International Polling data, America’s “favorability rating” soared 600% (you read that correctly!) under the tutelage of Ambassador Gutman. This type of seismic success does not just happen. This article directs your attention to some of the reasons why the American image in Belgium soared with Howard Gutman as the face of the U.S.A.

By all accounts, Mr. Gutman was not shy. He appeared on Belgian and European television hundreds of times. From Sunday news shows, late-night comedy, quiz shows, and even as an award presenter for Belgian’s Music Industry Award, Ambassador Gutman felt at home in front of the camera. He continues to be no stranger to the European media with regular appearances on Belgian television shows such as De Zevende Dag, Gasten T.V., and Terzake.
Ambassador Gutman took the time to get to know his Belgian constituency. He visited all 589 municipalities in Belgium often talking to government and business leaders along the way. Equally important, he met with ordinary citizens and workers often conversing in both French and Flemish. His village tour was completed in Voeren (2013) followed by a reception featuring Prime Minister Di Rupo and many mayors from around Belgium. Gutman’s strategy got the attention of The Wall Street Journal which ran a front-page article about his village tour experiences.

The Belgian Press took notice of Gutman’s gregarious personality and effective popularity. Characterized by La Soir, a leading Belgian newspaper, as “the Ambassador Who Makes Us Love America Again!” and as “Europe’s Most Popular Ambassador Ever!” Another Belgian newspaper, in discussing the very positive Belgian/American relations, noted: “there is no doubt that Ambassador Gutman would be elected were he to run in a Belgian election”.
In 2017, Howard Gutman was awarded the Grand Cross of the Order of The Crown—one of Belgium’s highest honors– by Deputy Prime Minister Kris Peeters. This award acknowledged his services rendered to Belgian companies wishing to invest in American markets and vice-versa. They both agreed to believe that: “We need each other”.

Upon retirement and his return to the U.S.A, Howard Gutman did not go quietly into the night. He is a senior partner in a Washington Law firm and heads The Gutman Group—a global consulting and investment group that services the legal and geopolitical concerns of international business. He remains a highly sought-after speaker on both sides of the Atlantic. He has given hundreds more speeches in Belgium, Denmark, and the United Kingdom. A leading thinker and speaker, Gutman often speaks to business and investment gatherings, civic groups, and universities. He remains a member of the Board of Directors of Exmar—-a publicly traded Belgian/American liquified gas company
Retired Ambassador Gutman feels at home in front of the camera in the United States as

well. As a member of Hollywood’s Screen Actors Guild, Mr.Gutman has appeared in several episodes of the television series “K Street”. He has played opposite Tim Robbins in the movie Noise and also a part in the Broadway musical Fame.

In 2012, according to the aforementioned Gallop International Poll — polling which measures “national mood Indicators” — Belgium finished first globally in its favorability towards the United States. Ever since America’s “favorability” has precipitously dropped to concerning levels. Certainly, there have to be factors that explain this seismic shift. All fingers point to the gold standard of diplomacy set by the then-American Ambassador to Belgium. Howard Gutman was a gregarious, active participant in American/Belgian affairs. He did not hide behind a desk pushing a pencil. He worked on both sides of the Atlantic and continues to do so. His was not an unconnected 4- year assignment but rather a continuing long-term relationship. Gutman was able to fuse the pragmatic with idealistic that serve as a diplomatic model for fostering good relations between countries. Given the temper of our times, we need this stellar example of diplomacy now more than ever. It bears repeating: “Howard…. we need you.”