Artist? Forger? Criminal? Patriot? (All of the Above!) 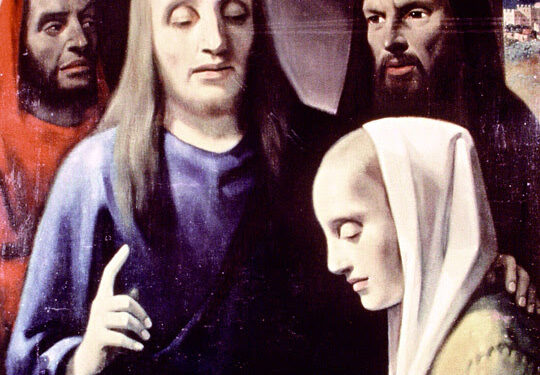 Christ with the Adulteress: Sold to Goring

Belgium, (Brussels Morning Newspaper) His father was so threatened by his son’s artistic interests that he forced the young boy to often write a hundred times: “I know nothing, I am nothing, I am capable of nothing”. How this psychological bullying affected the young Dutch artist is complicated. Suffice it to say that the boy would prove his father wrong — very wrong. The boy grew to know much, became something unique, and was capable of great, albeit nefarious, things. What follows is the illogical, twisted path to fame of the Dutch artist Han van Meegeren.

While attending art school in The Hauge, Henri “Han” van Meegeren (1889-1947) was obsessed with the paintings of the 17th Century Dutch Masters. The renowned artist guilds in Amsterdam, Gouda, Bruges, and Antwerp had produced the likes of such masters as Rembrandt, Frans Hals, Jan van Eyck, and Johannes Vermeer. So enamored was young Han that he rebuffed contemporary 20th Century styles and painted exclusively in the style of the Dutch Masters. His instructors however were not overly impressed claiming Han’s talent was: “limited, tired, and lacked originality”.

But they had to admit that the boy did indeed have a great gift—-that of copying and imitation. He was a gifted technician who made accurate facsimiles of the great Dutch artists. Han was not discouraged. He delved into the biographies of those artists, studying the smallest details of their lives, occupations, and thoughts but most of all, studying their trademark techniques.
As an adult, Han Meegeren had some limited success as a portrait painter but had to supplement his income by sketching posters, creating Christmas cards, and as a part-time art teacher in Brussels.

Always under financial stress (he lived extravagantly!) and to supplement his meager income, Han began selling “classic art originals” that were in fact his forgeries. After all, he was an accomplished technician that excelled at copying other people’s works. To prove his talent and to critics wrong, he began to forge the paintings of such greats as Frans Hall, Pieter de Gerard, and Johannes Vermeer. Critics, museum directors, and art aficionados accepted the paintings as genuine. Han’s most famous forgery was Christ with the Adulteress by Vermeer.

During World War II, that forgery was sold to one of the most powerful figures in the Nazi Party, Hermann Göring. Among Göring’s many crimes were looting and plundering valuable artwork from private collections and museums. After the war, the Allies slowly began to recover and account for some of the looted artwork. The records show that Han had indeed sold a piece to the war criminal Göring. This evidence resulted in Han facing the criminal charge of selling a Dutch National treasure. The penalty for “selling the cultural property of the Netherlands to the enemy and profiting” from the Nazis”, was death.

Han van Meegeren was brought to trial in Amsterdam on the shameful charges of fraud, aiding and abetting the enemy and also as a Nazi collaborator. In his defense, Han had to confess that the Vermeer painting was a forgery and therefore not a Dutch National treasure. He told the court; “the painting in Göring’s hands is not a Vermeer classic but a forgery. I painted the picture!”
The court was skeptical.

Experts deemed that Han’s paintings were so convincing, so skillfully copied to every conceivable detail that they proposed a bizarre legal precedent. Han was asked to produce a “forgery” in the presence of court-appointed art experts. Han passed the court’s scrutiny. It was determined that the piece sold to Goring was indeed a forgery and therefore NOT
“a Dutch National treasure”. The more serious charges of Nazi collaboration and cultural theft were dropped. As fate would have it, Han died a few months later not having served even one day in jail.

Han’s demise was not the end of his story, however. The court ruled that his estate be actioned off to pay court costs. His posthumous fame was considerable and his reputation as a skilled artist, albeit a forger, ensured quick and lucrative sales. Han’s popularity soared! A 1947 Dutch public opinion poll, placed Han van Meegeren’s popularity second in the nation behind only the Prime Minister. The public viewed him as indeed a cunning trickster who may have fooled the public and the art world but more importantly, he fooled the infamous Nazi, Hermann Göring.

During his trial, Han famously said; “Of course, I sold it to Göring. What better person to con this great Nazi bag of wind. How could a person better demonstrate his patriotism, his love of Holland more than conning the great enemy of the Dutch people.”
Granted, Han was simultaneously an artist, a forger, and a criminal, —- Indeed, he was all those things but more importantly, he died a Dutch hero and patriot.