Alexandria: Past Futures, an exhibition On new ways of reimagining the Egyptian city 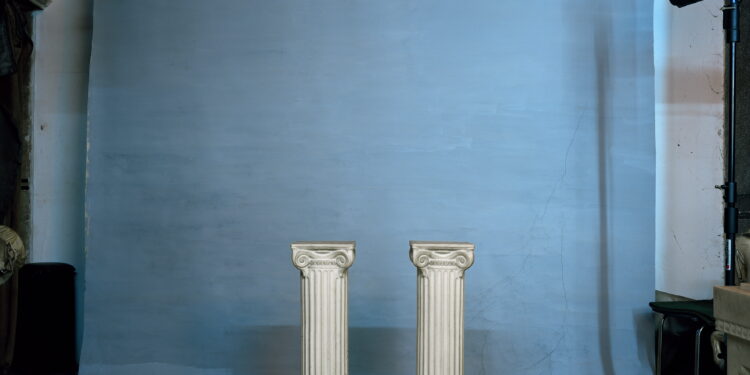 Belgium, (Brussels Morning Newspaper) A strip of land nestled between two lovers, the Mediterranean and Lake Mariout. A port city caressed by a passing breeze and the seasonal winds of North Africa. A memory that lingers. A tall sentinel guiding ships arrives safely to its harbor: the Lighthouse of Alexandria, a spectacular feat of architecture and engineering.

Alexandria, a city of Hellenistic glory in the ancient world and home to the Mouseion, where the Library of Encyclopedic Knowledge once stood. Alexandria was witness to the social and political changes that took place in Egypt in 2011. How does the rich multi-cultural heritage of Alexandria fit in today’s world? How do create new vistas to the Egyptian Mediterranean city that go beyond clichés and romanticized myths? How can art help create nuanced meaning? These are some of the questions explored in Alexandria: Past Futures, an exhibition on display at Bozar Centre for Fine Arts in Brussels from the 30th of September 2022 until the 8th of January 2023.

Put together in collaboration with the Royal Museum of Mariemont and the Mucem in Marseille, the exhibition takes visitors to the city founded by Alexander the Great in 330 BC. Alexandria emerged as one of the first ancient metropolises and was not only an important economic trading centre, but also internationally renowned for its cultural and scientific influence. A wide variety of peoples lived together, creating a unique melting pot with elements from Egyptian, Greek, Syrian, Roman, Jewish and other cultures. The most renowned scholars and researchers of the day met in Alexandria.

The exhibition features artifacts dating back more than seven centuries, from the founding of the city by Alexander the Great (331 BC) to the advent of Christianity (381 AD), as well as forays into Byzantine, Arab-Islamic and modern remains. With a selection of some 200 works from the largest European museum collections, the exhibition showcases the heritage and legacy of the megapolis by addressing its urban, political and religious organization, the daily life of its inhabitants, and the scientific and philosophical influence of this civilization hub in the ancient world.

Alexandria is also a contemporary city, marked by constant ecological, social and political erosion, determined by its colonial past, geopolitical realities and the tumult of globalization. “This exhibition deals with how the past writes present,” said Christine Perpette, CEO Ad Interim at Bozar. A questions that lingers in the air as one walks through the exhibition hall is: How is the past being reconciled with the post-colonial period?

The city today is in ecological, social and political decline, yet the idealized image of earlier times continues to feature in the collective consciousness. The exhibition responds to this friction. For Egyptian curator Sarah Rifky it was crucial to show the multifaceted nature of Alexandria in all its complexities. “There is to this day a political tension that can be felt in the city,” Rifky said. “For us it was important to maintain that tension as well.”

Through five major themes, the exhibition delves into the urban, political, religious organization of the city, the daily life of its inhabitants and the scientific and cultural influences of the important center of civilization in the ancient world. “In the exhibition there is a blending of historical time with contemporary and imaginary time,” said Nicolas Amoroso, curator at the Royal Museum of Mariemont. “They are in constant dialogue.”

There is also a strong focus on a typical Alexandrian phenomenon of antiquity: the concept of cultural bilingualism. The bridge between the cultures was build using hybrid creations with elements from both Greek and Egyptian traditions. Serapis, the patron god of Alexandria, is the Hellenized version of the Egyptian god Osiris.

Visitors will be at times in awe, at times disoriented. A constant droning sound, for instance, is part of Malak Helmy’s Music for Drifting (2013), which records the journey of a messenger bird equipped with a recording device as it travels past an old port on the edge of Alexandria, a hill where the First Battle of El Alamein was fought to stop the Axis from advancing into North Africa during WWII. The bird collects rhythms as measures from places that have since changed.

The public will discover a new selection of contemporary artworks (paintings, photographs, sculptures, audiovisual installations), three of which have been specially conceived for the exhibition by artists Wael Shawky, Jasmina Metwaly and Mona Marzouk.

In “Isles of the Bless (Oops, I forgot Europe)”, Shawky has created a new large scale drawing and a short film in which a marionette character recounts the Greek mythological account of Europa being raped by Zeus. Shawky’s piece invites viewers to re-think the founding myth of Europe.

2022 marks a double anniversary: the bicentenary of the deciphering of hieroglyphics by Jean-François Champollion and the centenary of the discovery of the tomb of the pharaoh Tutankhamun. In this context, Bozar joins forces with a major museum institution of the Fédération Wallonie-Bruxelles, the Royal Museum of Mariemont, which owns the second largest collection of Egyptian antiquities in Belgium.

At the same time as the Alexandria: Past Futures exhibition at Bozar, the Royal Museum of Mariemont will present Egypt. Eternal Passion, an exhibition that explores the fascination of ancient Egypt for the Western imagination from antiquity to the present day. Synergies and echoes between the two exhibitions will be suggested and visitors will be directly encouraged to move from one site to the other.

In parallel with the exhibition, two artists’ residency programs, a series of workshops, study visits, meetings and conferences in the cities of the different partners involved, will examine the multiple challenges facing the arts, heritage and cities through the symbolic and historical lens of the city of Alexandria, analyzing its influences on urban development in the Mediterranean and beyond.