The Cost of the Filibuster 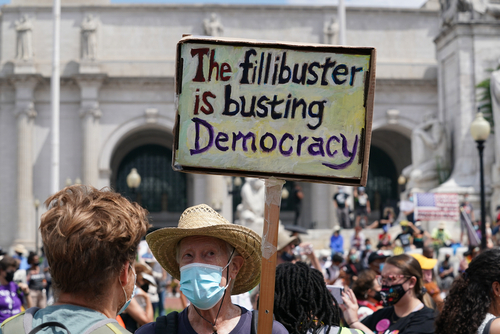 The USA, (Brussels Morning Newspaper) The filibuster is an obscure senate rule that many believe is enshrined in the US Constitution-it is not. Over the years the filibuster has taken many forms before arriving at its current iteration which is not so much a filibuster in the technical sense, but a cloture rule that requires sixty votes. And now, 19 children are dead in Uvalde, Texas in large part because of the filibuster-and that is why President Joe Biden’s words of concern and solace, which I believe to be sincere, mean nothing to me.

Passing gun reform in the US is agonizingly difficult not because the American people are divided on the issue. To the contrary, there are a number of reforms that most Americans, including many gun owners, agree upon including stronger background checks. The obstacle to gun reform is not public opinion, but the Republican Party. The base of the Republican Party is aggressively pro-gun and opposes any reforms. Because of the filibuster, all it takes is 41 GOP senators to stop federal gun policies, and the Republicans will always have at least that many anti-gun reform votes. Some actions can be taken on the state level, but because it is so easy for people to buy and transport guns across state lines, meaningful action must be taken by the federal government.

Throughout his campaign and the first part of his presidency, Biden refused to call for the end of the filibuster. The filibuster can only be abolished by the senate, not the president, but if the president called for it, he might have been able to put pressure on Democrats in the senate to support the idea. On the other hand, by defending the filibuster he made it very easy for Democratic senators to hide behind him and support the filibuster as well. This was done in the name of bipartisanship, senate tradition and working across the aisle. These fantasies from another era are apparently more important to Biden and many senators than saving the lives of young Americans, like those murdered in Uvalde.

Biden’s refusal to call for abolishing the filibuster stemmed from his deep belief in the system and mores that have governed America for decades, but that system and those mores have been badly broken and Biden, because of his half century of experience in Washington, lacked the perspective to see that. Biden has more recently indicated he supports abolishing the filibuster, but due to his declining popularity, he has a lot less leverage over Democratic senators than he did earlier in his term.

Gun advocates and their cheerleaders in the GOP always caution politicize these shootings which happen way too frequently in the US, but these killings are the result of partisan politics. They occur because a minority of Americans, who have tremendous influence within the GOP believe that it is the right of every American, regardless of age or intent, to own extremely powerful weapons that are only useful for quickly killing large numbers of people. That is the politics, and the partisan politics, behind these shootings. To believe otherwise is to seek succor in the false narrative that all Americans want to stop these killings.

Gun violence in the US includes high profile mass shootings, but is part of a larger problem that includes tens of thousands of homicides and suicides every year, as about 45,000 Americans who die due to gun violence annually. If we want this number to bring this number down, as well as reduce the fear of gun violence that effects every American, the answer lies not in earnest opinion pieces about the danger of guns or in platitudes about finding compromise, working across the aisle or rhetoric about this not being a partisan issue, but in uncomplicated political solutions.

The GOP fetishization of guns and gun ownership is an outgrowth of worldview the right-wing has foisted upon the American people for several decades now-that the US is a dangerous and violent place and the only way real Americans can protect themselves is not just buy owning high-powered weapons. This view is wrapped up in the fear and race-baiting that has defined the modern GOP-it has also become something of a self-fulfilling prophecy. The US is indeed a very violent place, but that is largely because so many people own so many guns.

Only by understanding the partisan nature of these terrible events is it possible to stop them. Although many of us feel powerless in the face of these tragedies, the truth is there is one simple thing that all Americans can do to stop them from happening and that is to vote for the Democratic Party at every level. If we don’t recognize this, we can talk as much as we want about reforming gun laws, but we will accomplish nothing.

Tags: Cost of the FilibusterMain-SliderOpinion section
No Result
View All Result