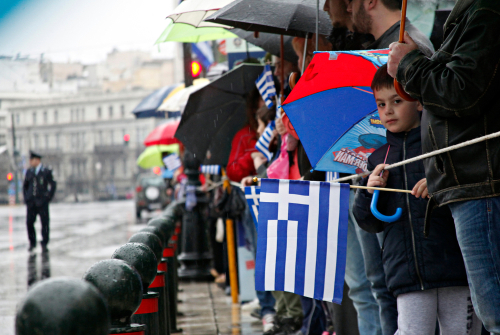 A boy holding a Greek flag during a military parade marking Greece's Independence Day in Athens, Greece on Mar. 25, 2015

Despite a rocky two-century start since the 1821 revolution of Greece, it is widely accepted that from 1974, Greece has achieved a long period of political democratic stability and leapt forward in terms of the quality and operation of its democratic institutions and the rule of law.

Brussels (Brussels Morning) Up until 1974, the modern Hellenic Republic can be described as a near-constant sequence of wars, dictatorships and periods of political aberration. The rare periods of democracy sprinkled throughout this time failed to establish a steady course for the deepening of Greek democracy; those periods of stability were the exception, rather than the rule.

For many decades and with various levels of intensity, the outlawing of political parties and the exclusion, imprisonment, displacement and exile of dissidents was the norm. For a large part of the citizenry, employment in public service was simply unapproachable.

The infamous “certificates of social convictions” were the chains that hung around the necks of the Greek citizens of the left, binding them to the fringes of society. Without them, one had no chance of a normal life. For decades, Greek citizens were divided into the ‘patriotic-minded’ and the ‘scum’, the people that the state placed on the boundary between legality and illegality, not for the unlawfulness of their actions or for crimes committed, but for their political beliefs.

Whole generations of Greeks had to learn to buy their preferred newspaper in secret, hiding it in the folds of one of the gazettes considered above reproach by the State. They learned to listen in secret to radio broadcasts from abroad, a practice that was sure to leave a social stigma, and a wholly illegal one during the time of the Greek military Junta.

And of course, speaking of the history of the respect of the rule of law in Greece, we cannot fail to mention the notorious ‘surveillance zones’, the post-civil-war, guarded exclusion zones near the borders, a unique Greek system meant to confine and control the mobility of populations that, for various reasons, bore the brand of ‘nationally suspect’.

All this, until 1974, the fall of the Junta. There began a period of meaningful democratization of the state and its institutions. It was a slow process, not at all untroubled, that met with significant resistance of the right deep state, that had plundered the country for decades.

And so, for decades more, all citizens, regardless of their political background eventually began to feel free, to be able to pursue justice without discrimination, to read the newspaper of their choice without having to hide it, to take an equal part in Greek society. Before 1974, all this would have been impossible. Political prison camps were closed down, the bars controlling the movements of those living near the borders were taken down (even if some took more time than others), trade unionism became a legal and socially accepted practice, and abortions were legalised.

Greece was set on a laborious but upward path of consolidating democratic institutions and the rule of law, and in a few short decades made up for a large part of the gap between itself and the European Community acquis, a difference owed to the vengeful post-civil-war policy of the Greek right and its allies abroad.

Greece was inducted in the European family inter pares and despite the mistaken or at times even disastrous choices made by various administrations, walked the path of convergence with the community acquis, regarding issues of rule of law. A course that was accelerated by the substantial institutional work of the left government led by Alexis Tsipras, which introduced reforms such as the legal recognition of gender identity, domestic partnership for same sex couples, the law on citizenship, etc.

Unfortunately, history never ceases to remind us that its progression is not linear, that progress is not automatic. After decades of positive developments, Greece is getting ready to celebrate the bicentennial of its War of Independence, amidst unprecedented — at least, since the political transition of 1974 — circumstances of institutional affront, receding of democratic liberties and a near-universal depreciation of the rule of law in the country.

The right-wing government of Kyriakos Mitsotakis is insulting the rule of law’s central pillar of the judiciary on a daily basis. It publicly calls for exonerating court rulings, pushes ‘troublesome’ judicial officials to the side and discredits independent authorities of critical importance. All these while using the pandemic as an excuse to display an extreme, constantly intensifying sort of authoritarianism, that every day warps my country a little further with each passing day, making it look less and less like an EU member state.

Unfortunately, Greece is not alone on the authoritarian slope. The notorious ‘Visegrád’ has precedence here, the small group of central European member states, that have been a constant source of undemocratic dissonance within the EU.

In spite of the verbal admonishments, piercing as they may have been, the European leadership has in fact handled the Visegrád phenomenon with a patience bordering on indulging a democratic aberration. An indulgence that cannot help looking like collusion. This has to stop.

The Greek Revolution of 1821, inspired a great wave of support from the peoples of Europe, gave rise to modern Philhellenism and brought a great number of European romantics in Greece, to fight among the insurgents.

Today, 200 years later, the EU owes its support to not only the Greeks, but also the Hungarians and the Poles and every other people trying to stand against the democratic decline caused by authoritarian practices of extreme right governments. United Europe faces a historic duty, to prove that it is in practice, as well as in theory, a community of law and democracy, and not solely a one-dimensional economic union — an association of capitalistic interests.

Two hundred years after the Greek revolution, the fight to stop the antidemocratic regression of my country, as well in the countries of the V4, is not a fight for Greece, Hungary or Poland.

The fight for Democracy and the Rule of Law is a fight for the soul and future of Europe.