Wagner Group under the Spotlight 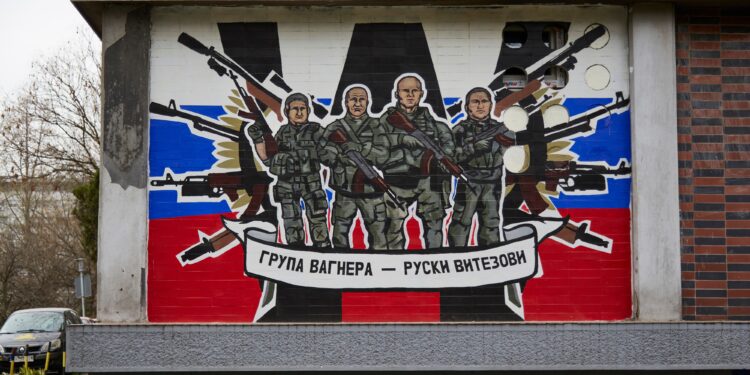 Belgium, (Brussels Morning Newspaper) The Wagner private military firm has been carrying out Moscow’s dirty work in eastern Ukraine, Libya, Syria, and other regions of Africa for years. The Kremlin has consistently denied any connection to Wagner, whose guns for hire have been charged with murder and other human rights offenses.

In Russia, where private military contractors are legally prohibited, the group operates outside the law, under the political protection of the Presidency. The organization reportedly only had 5,000 warriors at one time, the majority of them were ex-soldiers, including several from elite regiments. Additionally, The Wagner Group has raised its prominence and even opened a sizable new headquarters in St. Petersburg.

In contrast to Wagner, there are organizations in Russia that are PMCs. Wagner is older than the RSB-Group and Moran Security Group in Russia, which are more akin to their Western counterparts. These organizations’ founders are former members of the Russian military and security agencies. While they continue to be connected to the state, they primarily pursue business interests.

Wagner is believed to have been formed by Dmitri Utkin, a veteran of Russia’s battles in Chechnya, who gave the company its name after his previous radio call sign. Yevgeny Prigozhin, a wealthy businessman known as “Putin’s chef” because he handled the cuisine for the Kremlin, is the current leader.Previously denying any connections to the Wagner Group, Mr. Prigozhin now speaks candidly about the organization’s activities in Ukraine.

Wagner offers a glimpse into the larger dynamics of the Putin administration, particularly how it manages elites’ aspirations and self-interests. The Kremlin employs the company as a platform for the recruitment, training, and deployment of mercenaries, either to wage war or to offer security and training to friendly governments.

According to British government officials, the number of Wagner Group fighters in Ukraine has increased from 1,000 to roughly 20,000, a phenomenon of Russia’s growing reliance on the military contractor to support its invasion.

Ukrainian prosecutors suspect that three Wagner Group mercenaries, along with regular Russian troops, murdered and torturously treated citizens in the vicinity of Kiev in April 2022. According to German intelligence, following the departure of Russian soldiers from the Kyiv region in March 2022, Wagner mercenaries may also have slaughtered residents in Bucha.

In the Donetsk region of eastern Ukraine, Wagner is actively involved in Russia’s attack around Bakhmut and Soledar. The region neighbors the stronghold of the Wagner Group, which is located in the Krasnodar area. There is also a graveyard there and the group’s barracks.

From Private Company to Terrorist organisation

The Wagner Group had been under fire for allegedly violating human rights in the nations where it conducts business. In particular, sanctions have been imposed against the company and its owner Yevgeny Prigozhin by the US, the UK, and the EU.

Since its initial appearance in 2014 in the context of Russia’s annexation of Crimea, Wagner has participated in numerous conflict zones around the world, most notably in Syria, where Russian operatives were stationed to support the Assad regime through training, commanding combat operations, and securing vital energy infrastructure.

The organisation has recently tried to spread its model internationally, focusing in particular on Africa.

In 2019, the Libyan National Army (LNA), led by General Haftar, made an unsuccessful effort to seize Tripoli, and Wagner has been working there to support the LNA. It has been active throughout Sub-Saharan Africa, particularly in Sudan to support President Omar al-Bashir militarily and through training.

In Mozambique, where the group’s deployment was brief since it was compelled to withdraw from the country’s Cabo Delgado region within weeks after suffering substantial fatalities, where its engagement gradually changed from a support and training duty to a direct combat role.

More recently, Wagner mercenaries have been stationed in Mali to aid in counterterrorism operations. According to reports, Wagner and associated mercenary groups have carried out influence operations in a number of other African nations, including false monitoring missions.

There have been rumors that Burkina Faso could become a new battlefield for Wagner operations as a result of the coup there and the subsequent displays of sympathy for Russia.