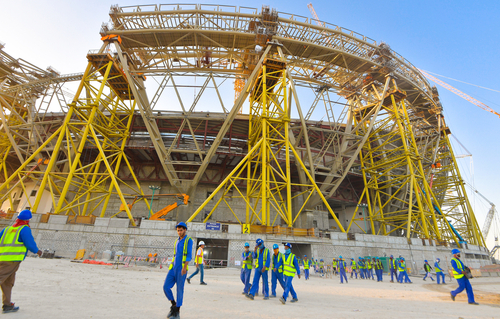 DOHA,QATAR-Feb 15, 2020 : Workers walk towards the construction site of the Lusail Stadium under construction which is scheduled to host the opening and final matches of the Qatar 2022 FIFA World Cup

Belgium, (Brussels Morning Newspaper) When Qatar won the bid to host the World Cup in 2010, the triumphant Gulf State unveiled plans to host what it promised would be the most spectacular of all World Cup tournaments and launched an ambitious construction venture to build state-of-the-art stadiums, luxury hotels and a sparkling new metro. Yet, over the next decade, the brutal conditions in which hundreds of thousands of migrant workers toiled in searing heat to make a reality of Qatar’s World Cup vision were exposed as investigations into forced labour, debt bondage and a rising worker death toll caused international outrage. In an effort to quell the mounting criticism, Qatar announced sweeping labour reforms in 2019. This included ending kafala, the system that made it illegal for migrant workers to change jobs or leave the country without their employer’s permission, effectively trapping workers who were being exploited and abused. Other reforms involved the introduction of the first minimum wage for migrant workers in the region and harsher penalties for companies that failed to comply with the new labour laws.

Brussels Morning spoke to the Belgian politician and MEP Marc Tarabella, Co-chair of the European Parliament’s sports intergroup, about the current situation in Qatar regarding the reforms for migrant workers and labour, and about future prospects.

Sarhan Basem (S.B.): Is Qatar listening to the EU when it comes to the country’s labour law and migrant worker reforms?

Marc Tarabella (MT):  Of course. Since being designated to host the 2022 World Cup in 2022, Qatar has made progress in the sphere of workers’ and migrant workers’ rights. Of course, as you know, there are many migrant workers in Qatar and it has been a long process. Progress is not so easy, because the same system has been the traditional approach in the Gulf countries and elsewhere — in Lebanon and other countries for example.  I think it is a positive signal to give more freedom for the workers so if they choose to they can opt to go back to their own countries. The same applies to the minimum wage issue. Wages are not paid in cash. It is mandatory to put the money in a bank account. The reformed system encourages transparency and helps ensure more rights for those who work outdoors in the sun so that when temperatures are at their highest in the middle of the day, they can stop working until 3 or 3:30 in the afternoon when the heat levels have eased off.  Also, there’s been progress now that the employer is obliged to provide food or money for food as well as money for housing and accommodation. That’s progress that I think we have to underline and welcome. Perhaps it is now time for the big World Cup organization to encourage Qatar to speed up the progress and to encourage other countries to do the same. The progress achieved in Qatar can be the same in countries such as Saudi Arabia and the UAE.  Certainly, I hope Qatar’s progress can be emulated in other countries.

S.B.: So, when it comes to reforms, Qatar can be a model for its neighbours?

MT: We are convinced that real progress has been made with regard to a change in the law. However,   it has to be fully implemented since there are some companies that remain reluctant to change. I think that Gulf countries should follow Qatar’s example. We hope that other countries do so, and discover the huge economic development that has resulted, thanks to the recent significant reforms there.

S.B.: Have you received any assurances that these recent developments and reforms will continue after 2022?

MT: We have a meeting in September with the Prime Minister and the President of the Human Rights Committee. He assured us that they will continue the reform process. We must keep in mind though in this instance, change is an evolution. The World Cup is not an insurance policy guaranteeing that the process will continue afterwards but the reforms should proceed, carefully, because it is necessary. The World Cup is not the goal, but it has presented an important challenge. Life will continue after it is over. I believe progress has to be sustained and continued in the right direction.

S.B.: How fast has Qatar responded to your recommendations and inputs on these reforms?

MT: Since they were first designated to host the World Cup in 2022, we have maintained pressure on Qatar to move forward, stressing the need to make progress in the sphere of human rights and workers’ rights. It is a long process, but I think that the progress we’re seeing now will be huge in 10 years thanks to the organization and impetus given by this event. They have to continue to implement this, focusing also on domestic workers, whose wellbeing we cannot monitor and follow because they are in private houses and organizations.

S.B.:Do these reforms in Qatar meet the EU values regarding human rights?

MT: Of course, in the context of the world, I think that Europe is probably is the default. We know that the minimum wage in Qatar is higher than in Romania and  Bulgaria. We are not perfect in Europe. I think that the model in Belgium, Germany, France, Netherlands, Sweden and other countries regarding the social protection of workers is important, and I think that going to this model is an evolution where all workers are protected and they can get health care, money, pension when they are retired. It is fundamental, and I think our model is not perfect. I mentioned that we have a lack of workers’ rights in Europe, because Europe is 27 countries, with several levels of life. I give you an example; the minimum wage is different in 22 countries. But it is 10x more higher in Luxembourg than in Romania. So there’s a huge difference.