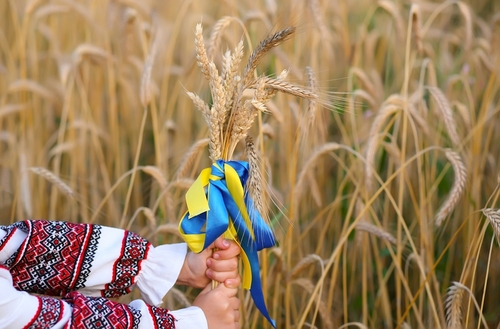 A bouquet of wheat spikelets tied with a yellow and blue ribbon in the hands of a girl in an embroidered shirt. Hands close-up focus on ears of corn. Independence day of ukraine, constitution flag

The Turkish Ministry of Defence reminded that the first wartime shipment of grain from Ukraine left the Port of Odessa on Monday, according to Reuters reporting on Friday.

Oleksandr Kubrakov, Ukrainian Minister of Infrastructure, noted on Friday “we expect that the security guarantees of our partners from the UN and Turkey will continue to work, and food exports from our ports will become stable and predictable for all market participants.”

After the UN warned that disruption of grain exports could cause famines, the organisation and Turkey brokered a safe passage agreement between Russia and Ukraine.

Ukraine and Russia are among the largest exporters of grain, and Russia is the main fossil fuel supplier for Europe.

According to the Turkish Ministry of Defence, three grain ships left Ukraine on Friday carrying a total of roughly 58,000 tonnes of maize.

The Navistar, flying the flag of Panama, set sail from Odessa to Ireland with 33,000 tonnes of corn.

According to Odessa regional administration, the Liberian-flagged Osprey S is to arrive in the Port of Chornomorsk later today as the first wartime arrival at a Ukrainian port.

Taras Kachka, Ukraine’s Deputy Minister of Economy, called for expanding the safe passage agreement to other exports in an interview with the Financial Times. “This agreement is about logistics, about the movement of vessels through the Black Sea,” he noted.

On Thursday, NATO Secretary General Jens Stoltenberg described the proxy war in Ukraine as the most dangerous conflict for Europe since WWII, stressing the importance of not allowing Russia to win.

Commenting on fears of some politicians that Moscow’s aggression could extend beyond Ukraine, Stoltenberg stressed “if [Russian] President [Vladimir] Putin even thinks of doing something similar to a NATO country as he has done to Georgia, Moldova or Ukraine, then all of NATO will be involved immediately.”