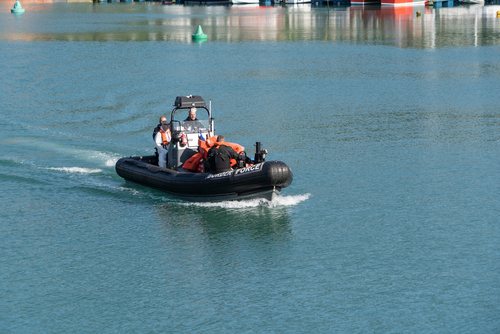 Brussels (Brussels Morning) UK authorities reported more than 800 illegal crossings of the English Channel on Saturday – the highest number ever recorded in a single day.

The Home Office pointed out that French authorities stopped close to a further 200 people from attempting to cross the Channel on Saturday. More than 12,000 crossings have been recorded this year, according to BBC reporting on Tuesday.

Commenting on the “dangerous crossings,” UK officials said there are legal and safe routes for migrants to take and added that the UK is cooperating with foreign partners to curb unlawful crossings.

According to the Home Office, UK authorities intercepted or rescued 828 people in 30 boats on Saturday, while French authorities thwarted attempted Channel crossings of 193 people in 10 boats.

It added that no crossings were recorded on Sunday or Monday and reminded that the previous daily record for illegal Channel crossings was set on 12 August and stood at 592.

Clandestine Channel Threat Commander Dan O’Mahoney said: “these dangerous crossings from safe EU countries are completely unnecessary and we are determined to take down the evil criminal gangs behind them.”

In July, the UK and France agreed to strengthen border control in the Channel, with France to double the number of officers guarding its side. In addition, France will step up intelligence-sharing efforts and start using better technology against human traffickers.

The UK is aiming to deter illegal crossing attempts by overhauling its rules on asylum. According to the Nationality and Borders Bill currently discussed by MPs, illegal border crossings will be punishable with up to four years in prison.

Some activists and charities called on the government to focus on the creation of new safe routes for migrants and schemes for refugees and asylum seekers.

UK ministers recently announced plans to take in 5,000 Afghans as part of a resettlement programme, adding that the long-term goal is to take in 20,000.