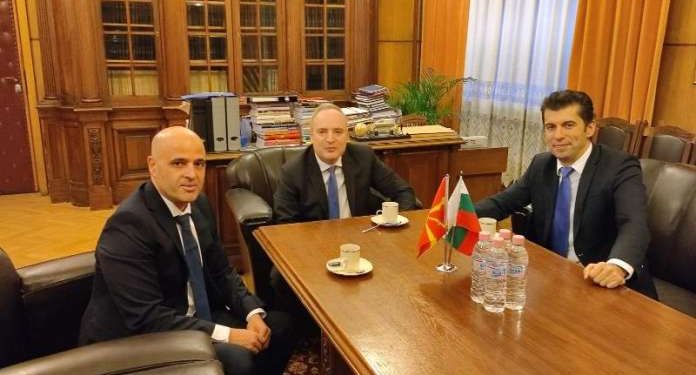 Belgium, (Brussels Morning Newspaper) The new leadership of Bulgaria and North Macedonia have announced a new chapter in their relations.

Since the EU approved the start of accession negotiations with North Macedonia in March 2020, Bulgaria has been blocking it, demanding that the applicant country accepts the Bulgarian origin and character of the Macedonian nation and its language.

North Macedonia rejected the demand, pointing out that it went against EU principles of self-determination.

Last week, the two newly elected PMs announced taking a new direction in order to address their strained bilateral relations. Petkov told a joint press conference after a day of talks that he was “very optimistic about the new dynamics” and felt assured that “results will be visible every week.”

According to Kovacevski, the two had ”promised each other that we will use new energy to improve our relations with respect.”

Both governments had agreed to a joint meeting in Sofia and to set up working groups to improve cooperation on education, trade, economic issues, history, culture, and EU integration.

Bulgaria was criticised by the US and fellow EU member states after it blocked the start of North Macedonia’s accession talks with the bloc.

Germany’s junior minister for Europe Anna Lührmann acknowledged when visiting Albania earlier this month that Bulgaria is now showing “positive signs.” She indicated that the German government wants EU accession talks with Albania and North Macedonia to start as soon as possible.

North Macedonia made the first move towards compromise with Bulgaria just before PM Petkov’s visit last week, informing the UN that its name refers specifically to the country and not to the geographic region.

Until recently, Bulgaria had maintained that the name “North Macedonia” implied territorial aspirations towards the Bulgarian region of Pirin Macedonia.

North Macedonian analyst Sašo Ordanoski now predicts that relations between the two countries will improve in the coming months, attributing the change to “growing international pressure” on Bulgaria.

Bulgarian analyst Ivaylo Ditchev also expects relations to improve, saying “there is hope because we have finally heard the magic word ‘compromise.'”