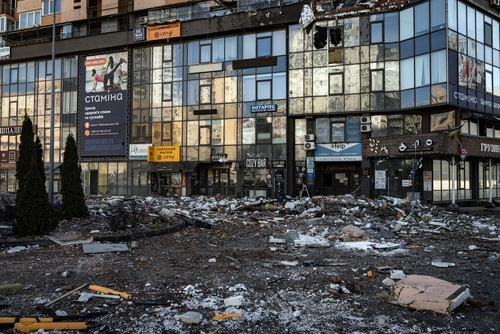 Belgium (Brussels Morning Newspaper) Three prime ministers of EU and NATO countries visit Kiev today, taking a train ride to the besieged Ukrainian capital in a show of support for the war-ravaged country.

“It is our duty to be where history is forged”, said Polish Prime Minister Mateusz Morawiecki before setting off along with Czech colleague Petr Fiala and Slovenia’s Janez Janša. “Because it is not about us, but about the future of our children, who deserve to live in a world free from tyranny”, Morawiecki declared.

The aim of the joint visit, according to Fiala, is to “confirm the unequivocal support of the entire European Union for the sovereignty and independence of Ukraine”. Their destination, the seat of the Ukrainian government, has been under near-constant shelling since Russia’s President Vladimir Putin initiated his invasion of the neighbouring country on 24 February.

Kiev was rocked by two powerful explosions before sunrise today. A high-rise apartment building ended up engulfed in flames after being hit by artillery shells. Despite the encroaching Russian forces edging closer to the city, major road and train routes from the capital remain open, with around half of the city’s 3.4 million pre-war residents remaining in their homes.

The visit by the three EU leaders will mark the first instance of western heads of state or government arriving in Ukraine for a state visit since the outbreak of the war, a gesture intended apparently to send a message that the Russian invasion has failed to cut off Ukraine from the rest of the world.

President Volodymyr Zelensky today called on Russian troops in Ukraine to surrender, in what is considered his most confident public statement to date. “You will not take anything from Ukraine”, he declared. “You will take lives. There are a lot of you. But your life will also be taken. But why should you die? What for? I know that you want to survive.”