Reports of Progressive Demise in New York Are Greatly Exaggerated 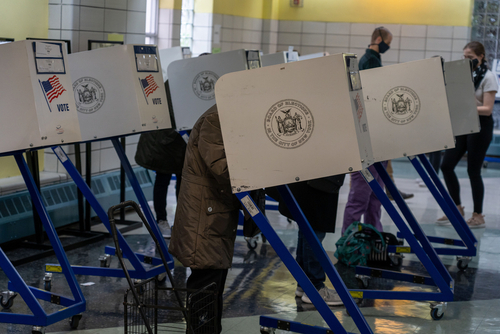 NEW YORK, NY – NOVEMBER 03: People cast their vote for the 2020 U.S Presidential Election at a polling site in Manhattan on November 3, 2020 in New York City.

New York (Brussels Morning) Last year thousands of New Yorkers took to the streets in the middle of a pandemic to express their outrage over the murder of George Floyd by police officer Derek Chauvin. These demonstrators demanded an end to police brutality, called for meaningful police reform and expressed their positions through two memorable slogans “Black Lives Matter” and “Defund the Police.”

A year later in the midst of a frequently misleading media narrative about skyrocketing crime, Democratic primary voters in New York abandoned those progressive ideals and nominated a former police officer and conservative Democrat, Eric Adams, to be their candidate for mayor.

During the campaign, Adams positioned himself as a conservative, criticising progressives like Alexandria Ocasio-Cortez, expressing contempt for the Black Lives Matter movement, adapting a much more pro-landlord position than most of his opponents and successfully campaigning for the votes of Orthodox Jews, outer borough ethnic whites and others who represent the most conservative wing of the Democratic Party in the city

That is the conventional wisdom that is forming around New York’s recently completed Democratic primary. The vote counting is not yet over and due to the city’s rank choice voting system two other candidates, the centrist technocrat Kathryn Garcia, who is currently in third place, and the progressive choice, Maya Wiley, currently in second place, still have a small chance of winning.

However, Adams is very likely to be the nominee, and in this heavily Democratic city will almost certainly win the general election in November. Despite Adams’ likely victory, a closer look at the primary results reveals that the extent to which this election was a victory for the moderate wing of the party is greatly exaggerated.

The two other races for citywide offices are looking like clear victories for the left. Public Advocate Jumaane Williams, a progressive stalwart, was not only reelected easily but was so electorally strong that he drew no significant opposition in his primary. In the race for Comptroller, the city’s chief fiscal officer, Brad Lander, one of the City Council’s smartest and most progressive voices appears to be heading to victory against liberal Democrat Corey Johnson.

District Attorney (DA) races have drawn more attention in recent years. as progressives like Chesa Boudin and Larry Krasner have been elected and sought to reform the criminal justice system in San Francisco and Philadelphia respectively. The Manhattan DA is the most visible in the country and is particularly important now given the legal troubles the Trump clan faces here.

The new Manhattan DA will be Alvin Bragg, a progressive who is African American. He defeated a very well-funded and more conservative opponent. In numerous lower profile races such as Borough President and the City Council, progressives are heading to victory as well.

Adams himself is a complex figure with a compelling personal story and a mix of progressive and conservative positions. He is a former police officer who wants more police on the subways and continues to oppose the Defund The Police movement, but he also grew up facing the constant threat of eviction and homelessness, was himself a victim of police brutality and speaks eloquently and compellingly about fixing the ecosystem around public safety and of early interventions for struggling schoolchildren.

However, he also has strong ties to the city’s powerful real estate interests and has been dogged by charges of corruption throughout much of his political career. In short, it is very difficult to determine what an Adams mayoralty might look like.

Regardless of how Eric Adams wants to lead New York, he will have to act within the city’s larger political context. This includes the electoral reality that, unlike previous right of centre mayors over the last half century like Ed Koch, Rudy Giuliani and Mike Bloomberg, African American voters are at the core of Adams’ coalition. Therefore, if he is too pro-police or insensitive to the needs of that constituency, his political support will collapse.

The mayor of New York has a lot of power, particularly when compared to many western and southern cities, but Adams will still have to reckon with a City Council that will likely be to his left as well as two progressive citywide elected officials, Lander and Williams, who will advocate for positions on policing, budgeting and other issues also well to the left of Adams. Adams can either find his way to compromising with these political actors or can spend the next four years fighting with his own party while accomplishing little.

Adams has already sought to assert his political strength by proclaiming himself the “face of the new Democratic Party,” but the evidence supporting that assertion is not so clear. Adams put together an unusual coalition, campaigned energetically and won a very competitive Democratic primary.

He deserves credit and recognition for that, but it looks increasingly that his unique political profile and coalition, rather than any broad support for a more conservative Democratic Party, is why he won. Democrats in New York, and nationally, would be wise to keep that in mind.