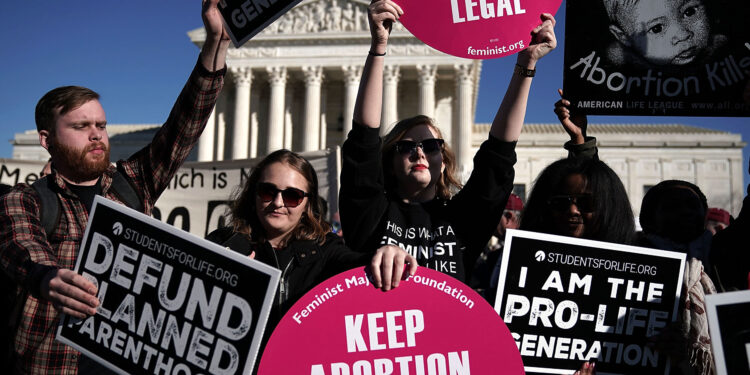 The USA, (Brussels Morning Newspaper) Following the leak of the Supreme Court decision that will overturn Roe v. Wade, in addition to the strong reactions from both pro and anti-choice forces, there was the inevitable hand-wringing among many in the legal-media-political establishment about how this decision will further undermine trust in the Supreme Court and lead more Americans to see the highest court in the land as little more than a partisan body.

This concern is well-founded, but it is time we recognize that it is a good thing for democracy if we see the Supreme Court more soberly and through a lens that is more grounded in reality rather than sepia toned ideas about the genius of the founding fathers.

Indeed, Americans should recognize that in no other democracy in the world are such a small number of unelected, yet almost always partisan, people, who have lifetime tenure and whose appointments follow such a seemingly random timeline have so much power. The fading public perception of the Supreme Court as a place for wise jurists to quietly contemplate the finer points of the Constitution before handing down rulings that reflect their nonpartisan wisdom is clearly nonsense. One way to see this is that recent nominees have been chosen in substantial part because of their age so they can serve for a long time and because their record demonstrates they can be expected to vote along the ideological lines of the president who appointed them. Sometimes this means the nominee still has a sterling legal resume, like Ketanji Brown Jackson or Neil Gorsuch, but other recent nominees like Brett Kavanaugh and Amy Comey Barrett were partisan operatives before embarking on legal careers that groomed them for the Supreme Court.

If the American people begin to recognize this is the reality of the court, they may begin to push more aggressively for changes. In a democracy, a body that is vested with such important legislative power, even if it is done in the name of Constitutional review, should be accountable to voters, either directly or indirectly, but the Supreme Court has no accountability. Moreover, the randomness of Supreme Court appointments has little place in a democracy. For example, due in part to Mitch McConnell’s unwillingness to have the senate fulfill its Constitutional duty when President Barack Obama nominated Merrick Garland in 2016, Donald Trump, who only served one term as president got three nominees to the court. The last Democrat to only serve one term, Jimmy Carter, had no appointments because no justice happened to die or retire when he was in office.

We now have a majority on the Supreme Court that is due to three justices who were nominated by a president, Donald Trump who lost the popular vote. Additionally, these three justices were confirmed by senators who represent fewer Americans than those senators who opposed their nomination. It would take extraordinary rhetorical contortions to suggest that this process is somehow democratic.

Supporters of the Supreme Court and this system will assert that this is what the founders wanted. There are two important arguments against that notion. First, it is probably not true. Anybody who has studied the founding documents of the US knows that the founders did not imagine, and certainly did not discuss, political parties coming to dominate the US political system and to bring together precisely what the founders sought to divide. Secondly, we need to recognize the absurdity of continuing to allow the US to be governed in an undemocratic fashion, beyond simply the court, because of what a group of smart, but deeply human and flawed, people wrote, in part because of the need for political compromise and to protect the institution of slavery. The proper response to somebody righteously asserting “this is what the founders wanted” is to say “so what.”

The belief that the Constitution is a reflection of unique political genius and therefore should remain the guiding light of the country despite the undemocratic flaws of the Constitution that are evident even to most not particularly precocious secondary school students, is a triumph of religious fervor and political indoctrination over intellectual and critical facilities. That religious fervor and political indoctrination is now a barrier to greater democracy in the US.

Overturning Roe v. Wade will be the next step in the erosion of the myth of the infallibility of the Constitution and that may move the US closer to democracy. Abortion rights is such a stark issue that many Americans who are not highly ideological and rarely think of the Supreme Court may begin to focus on how flawed the institution and the process that creates it. If, as many fear, the Supreme Court next seeks to overturn the Obergfell v. Hodges case that legalized same sex marriage and even ban contraception, as many believe, they will do, the problems that institution will be laid even more bare to the American people.