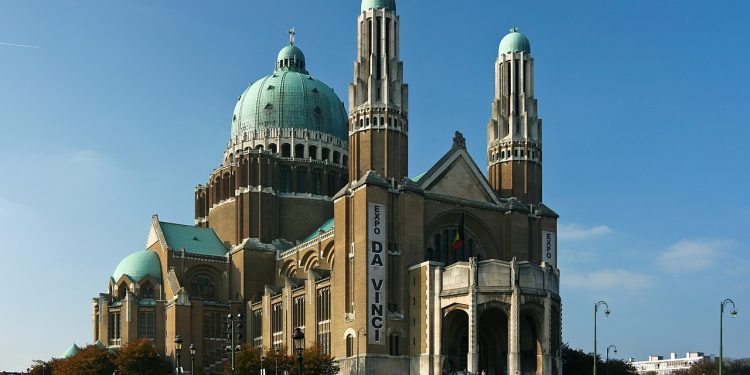 BRUSSELS (Brussels Morning) – The Basilica in Koekelberg will probably lose 90 of its parking spaces. According to the urban.brussels government agency, the church does not have a permit for this.

This concerns parking spaces on both sides of the basilica (zones K2 & G2). These are separate from the parking spaces intended for the public and local residents and are used exceptionally during events. The car park at Ganshoren (G2) has been unavailable for several years due to the works on the Leopold II tunnel. Now the urban.brussels public service is said to have found that there is no planning permission for the use of these parking spaces. The parking spaces for the general public (zones K1 & G1) would also be illegal according to the government service. At the moment, they remain accessible and will most likely be subject to a permit.

But this is not correct, says the director of the Basilica, Martine Motteux-Abeloos. “The Basilica and the Brussels Region have had an agreement since 1978 regarding the exceptional use of these parking spaces. Banning these parking spaces is also not an easy thing to do. Not without consultation with the church body and the two municipalities”.

Attempts to communicate with urban.brussels are not going well and the mayor of Koekelberg is also difficult to hear from, the Basiliek director continues. The next step is to ask for an interview with State Secretary for Urban Planning and Heritage Pascal Smet (One.brussels). “We are not only the sixth largest church in the world, but also a center of culture and music. We need enough parking space to keep Koekelberg alive,” said director Motteux-Abeloos.

It is not the first time that the Basilica has faced problems around these exceptional parking spaces. Due to the lack of a fence around this car park, the church often suffers from wild parking. The local police have often had to intervene here. As a temporary solution, Brussels Environment has placed concrete rocks on the site to block access to these parking spaces.

While this is a temporary solution, it also brings problems. The church understands the intervention, but still prefers to get off the rocks.

“The scouts entrance, which is often used by the fire brigade, is no longer accessible. And of the number of parking spaces for people with disabilities, there are now only 2 left, which is difficult.” says Mrs Motteux-Abeloos. “Brussels Environment and the Basilica are partners. And we try to find a solution to the same problem together. Unfortunately, this is currently doing more harm than good.”