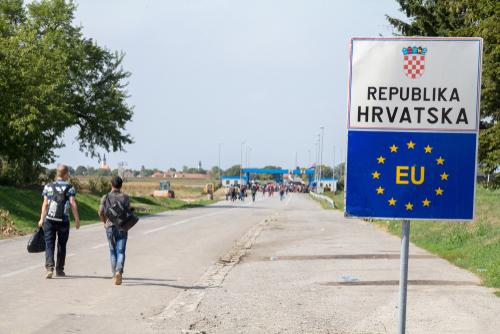 Brussels (Brussels Morning) One migrant was killed and four injured when a group of migrants stumblied into a suspect minefield area in a forest area near Saborsko, a sparsely-populated Croatian village close to the border with Bosnia and Herzegovina.

After a young male migrant stepped on a landmine left over from the Croatian War of Independence on Thursday, police managed to locate the remainder of the group next day using a helicopter. Then, having warned the group of their hazardous surrounds, they instructed them to remain stationary until rescue teams could reach them.

On Saturday, three special police force teams from the Lučko anti-terrorist unit were dispatched and navigated a safe passage through the mined area. On reaching the remainder of the group, the police managed to transfer the four injured migrants to hospital. One of the four suffered life-threatening injuries and is reportedly in a critical condition. The six uninjured members of the group stated their desire to request asylum in Croatia.

Thousands of migrants stationed in camps in Bosnia and Herzegovina near the Croatian border regularly attempt to cross the line in bids to request asylum in an EU member-state. Croatian police have been accused repeatedly of illegally pushing back such attempts. Various international organisations have filed numerous well-documented and researched cases, including Amnesty International, Doctors Without Borders, and the Office of the UN High Commissioner for Refugees.

Croatia’s Interior Ministry has insisted regularly that its own internal investigations have found no evidence of any such practices by the Croatian police. However, the ministry simultaneously rejected any kind of independent investigation, while illegally blocking access to the Ombudswoman, the media and even to European Parliament members who attempted to observe the situation at the border.

Following a visit to migrant camps in Bosnia by European Commissioner for Home Affairs, Ylva Johansson, the EC reportedly has begun talks with Croatia’s Interior Ministry to establish a monitoring mechanism which would prevent illegal pushbacks from taking place.