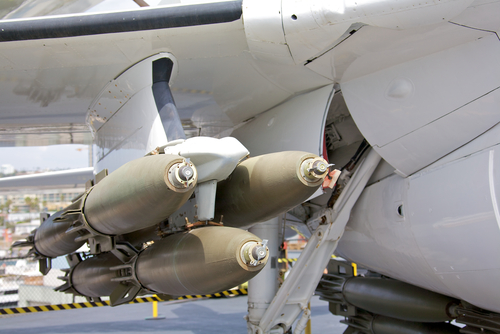 Belgium (Brussels Morning Newspaper) Open letter on the topic of urging the European Union’s leadership to take immediate action for international pressure on the Russian government to refrain from using thermobaric weapons and cluster bombs in Ukraine was submitted by 25 members of the European Parliament.

In the letter addressed to the President of the Commission Ursula Von Der Leyen and Vice President of the Commission/High Representative Josep Borrell its noted that according to reports from the Ukraine government and human rights groups such as Amnesty International and Human Rights Watch, Russian forces in Ukraine may have used and may be continuing to use thermobaric weapons and cluster bombs. If confirmed, deployment of these weapons, especially in crowded civilian areas, would usher in new humanitarian concerns in the conflict.
– ” Cluster munitions are a type of explosive weapon which scatters submunitions (“bomblets”) over a large area. They often fail to explode on initial impact, leaving unexploded submunition duds that act like landmines if they are touched. These weapons are banned under The Convention on Cluster Munitions (CCM) of 2008, an international treaty that prohibits all use, transfer, production, and stockpiling of cluster bombs, because of their widespread indiscriminate effect and long-lasting danger to civilians. While their use is not prohibited in itself because neither Russia nor Ukraine – nor the US, China, India, and other countries – have joined the 2008 convention, the use of inherently indiscriminate weapons in populated areas is prohibited under customary international humanitarian law. Moreover, according to the Geneva Conventions and the Rome Statute that established the ICC their use could amount to a war crime if deployed in an indiscriminate attack – those that cannot distinguish between combatants and civilians – or one intentionally targeting civilians. We are seeing mounting evidence of indiscriminate attacks and the price civilians are paying for these serious violations. If these deadly acts were carried out either intentionally or recklessly, they would amount to war crimes. -” it’s written in the letter.

The MEPs underline that while cluster munitions are banned by international convention, thermobaric munitions – also known as fuel-air explosive devices, or “vacuum bombs” – are not explicitly prohibited for use against military targets.
In the letter, it is noted that the “Vacuum bombs”, or thermobaric weapons, suck in the oxygen from the surrounding air to generate a powerful explosion and a large pressure wave that can have enormous destructive effects.  Thermobaric bombs are devastating, and effective in urban areas or open conditions, and can penetrate bunkers and other underground locations, starving the occupants of oxygen.
– ” Although thermobaric weapons are not yet unequivocally banned, there are several points that argue against their development and use. International humanitarian law stipulates that the use of weapons in indiscriminate and disproportionate attacks is forbidden. A thermobaric weapon might be targeted specifically at military installations and personnel, but its effects cannot be contained to one area. In all likelihood, many civilians would be killed if such bombs were used in any city. Using explosive weapons in populated areas would result in indiscriminate and disproportionate attacks. Aerial bombs, even if aimed at military objectives, pose a grave threat to civilians because of their wide blast radius. If confirmed, deployment of these weapons, especially in crowded civilian areas, would represent an escalation in brutality that should alarm us all. There has long been an understanding that even wars have their limits: while some weapons are considered legal, others are not, precisely because they violate key principles of humanitarian law. As a human tragedy unfolds in Ukraine, the European Union must prove its commitment to international justice, stand firm in our commendation of these atrocities and ensure that the perpetrators of the most serious crimes are brought to justice and held to account. We owe it to the victims of these crimes. We, therefore, want to express our preoccupation concerning the alleged use of thermobaric weapons and cluster bombs by Russian forces in Ukraine and call on you, as Commission President and VP/HR, by virtue of your roles, to remain vigilant in regard to the conduct of hostilities and the protection of civilians in the country ” – it’s written in the letter of the MEPs.