Media freedom in danger? The Visegrád Group as Achilles’ heel of Europe 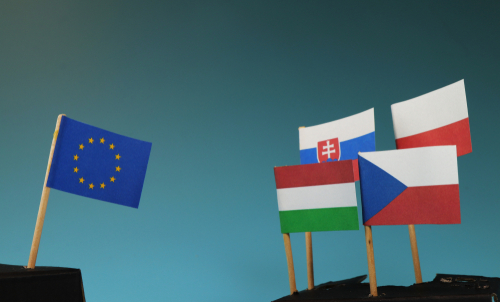 A europe union on one side and vysegrad four on second side. Who will win? Blue background

Belgium, (Brussels Morning Newspaper) The latest survey shows that more than half of Czech citizens think that media freedom is in danger. This pattern is similar in all V4 countries – 63 % Poles, 49 % Slovaks and 49 % Hungarians are worried about media freedom. Such a trend is not surprising at all, especially considering the growing politization of media landscape in these countries. Fortunately, this could change soon as the European Commission is currently working on the European Media Freedom Act (EMFA).

Up to 86 % of Czechs recognize media freedom as a social value. Free media as such constitute a significant pillar of democracy and rule of law. If the majority of the broadcast time were devoted to positive news about the ruling political party, it would disrupt the functioning of the state. Moreover, it would return us to pre-1989 times when the state television served only for the purposes of the Communist Party.

For example in Hungary, most of the independent media has been systematically disposed of. Furthermore, Viktor Orbán owns the majority of the media and uses them for promotion of his narrative. Orbán’s manipulation of information could be seen in the recent election campaign, when he used the war in Ukraine to weaken the opposition. The narrative he used was, that the opposition wants to go to war and Hungary will end up in the war conflict if he loses the elections.

It is important to acknowledge, that the public service media play an indispensable role of watchdogs and are an integral part of a functioning democracy. Unfortunately, they can also disrupt the democracy if they are owned and abused by the ruling parties. Therefore, we can never stop fighting for media independence and true freedom.

According to The Press Freedom Index, during Babiš’s reign, Czechia dropped from 23rd (2017) to 40th place (2021). The improvement can be seen in 2022, when Czechia jumped up to 20th place. The fact that media dependence on the government is problematic in all V4 countries proves the long-term deteriorating position of Hungary, which fell from 23rd (2010) to 85th (2022) during Orbán’s reign.

In fact, up to 80 % of media financing is decided by Viktor Orbán. Factually, independent media are non-existent in Hungary. It would be unfortunate for Czechia to find itself in a situation where public service media do not provide space for all opinions; and conversely, they silence investigative journalists who report on corruption and other issues related to political leaders.

Media freedom as a mirror of polarized society?

The independence and balance of media are essential for unbiased scrutiny of policies. Furthermore, it is important for functioning of the government, the opposition and the administration of the state. And last but not least, to provide media space for expression to all political entities in the state. This ensures that the political competition among political parties is not distorted.

Is there a way out?

The Pirates are pushing for the principle that politicians should not own the media because of the disproportionate advantage it can provide. At the same time, media owners should not interfere with editorial autonomy. However, if the media reflect the ideas of the owners or patrons, it is necessary to clearly state who is funding the particular media.

It is no secret that Andrej Babiš owns the media group Mafra, which is the largest Czech media house. He regularly publishes op-eds, while none of the representatives of the governing coalition (or the opposition in previous years) gets space for the same. Therefore, Andrej Babiš spreads his narrative easily. For example, last year, a number of his op-eds uncritical towards former government were published, but without possibility for opposition to comment. It is no surprise that this year, on the other hand, there are numerous comments criticizing government, without the actual possibility for the government coalition to react on them. At the same time, in the published op-eds, Babiš is not listed as the owner of the medium. New legislation at the European level should also change that. Its aim is, among other things, to level the playing field for political competition and to prevent media abuse.

The Media Freedom Act (EMFA) is a long-awaited European legislation that shall address also the issue of media ownership. The EMFA should ensure that property structures of the media are not only transparent, but also proactively published. In order to avoid conflict of interest and to safeguard media independence, media should not be owned by politicians.

Transparency of media ownership and their independence from politicians are crucial for the functioning of democracy. Furthermore, the paid advertising by state-owned companies is also problematic. For example, since 2015, the state-owned railway operator Czech Railways has spent most advertising money at the Mafra media group. It is not possible for state-owned enterprises to pay the highest amounts of public money for advertising, marketing, or media promotion in media that is linked to the governing party.

Furthermore, it is important that the Commission does not limit its proposal to the economic impact on the media market. It also needs to focus on media freedom and pluralism. The media have a direct and indisputable influence on the state of democracy and cannot, therefore, be seen solely as an economic entity.

We need to create a legal framework that will increase transparency of media financing, prevent their politicization, and, above all, stop perceiving the media only as an economic entity.