March with 4,800 people marches through Brussels for women’s rights 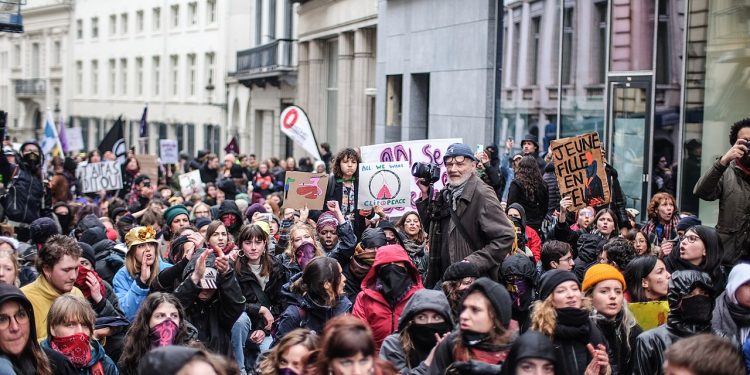 BRUSSELS (Brussels Morning) – On the occasion of International Women’s Day, a march with 4,800 participants marched through the streets of Brussels on Tuesday evening. This is reported by the Brussels-Capital Ixelles police. The starting and ending point was the ‘feminist village’ at the Europe crossroads in front of the Brussels-Central station.

The women’s march was dominated by several themes. In the first place, the women’s movement asks that the recovery after the health crisis be more focused on women, so that they can return to work full-time and that the men take on at least as many household tasks. They condemn economic consequences that push women into poverty.

Now that the bars and discos have been fully reopened for some time, sexually transgressive behaviour is another important theme. This is how the #BalanceTonBar movement was born, with many testimonials about girls being drugged and assaulted while going out.

The participants in the women’s march condemn any form of sexual violence against women. Various protest signs read messages such as ‘Fight like a girl’, ‘subjects and not objects’, ‘not without permission’ or ‘the street is ours’.

Finally, they demand that all discrimination against women in general, but also against trans people, non-binary people and migrants stop immediately. Their rights must be guaranteed.

Actions related to Women’s Day also took place elsewhere in the city. For example, there was a demonstration to value the role of women in agricultural production. The Food and Agriculture Organisation of the UN estimated in 2009 that women are responsible for half of the world’s food production.

Yet they are poorly represented in trade union and cooperative structures. Also, the tasks often entrusted to them, such as milking, administrative work and the care of calves, are less valued than field work or herd management, which are more the domain of men.