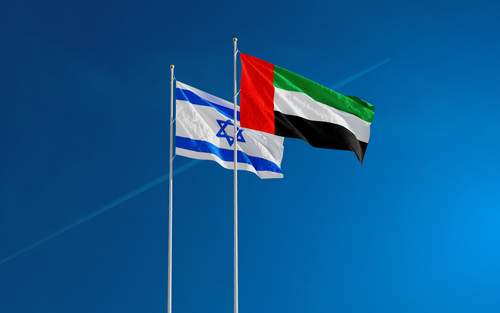 Brussels (Brussels Morning) Israel Foreign Minister Yair Lapid arrived in the UAE on Tuesday for a landmark two-day visit, marking another step in the significantly improving relations between the two countries that was first ushered in nine months ago with an historic deal to normalise ties.

Lapid opened the first Israeli embassy in the UAE in Abu Dhabi, where he met with his Emirati counterpart Sheikh Abdullah bin Zayed Al Nahyan. On Wednesday, Lapid went on to inaugurate Israel’s first consulate in Dubai.

During his meeting with the top Emirati diplomat, Lapid signed an agreement on economic and commercial cooperation, intended to enable the exchange of goods, latest technologies and tourist visits between the two countries as part of the normalisation agreement.

While in Dubai, Lapid also visited the site of the gigantic Expo 2020 Dubai, the international global fair scheduled to get underway in October with more than 190 countries participating, Israel included. Referring to the newly established consulate office, he called it “a centre of cooperation” that symbolized the two countries’ ability to think and develop together.

Talking to the press on Wednesday, he promised that relations and mutual cooperation will improve further, as more deals would be signed in July in Israel. “The vision is that it moves from governments, to business, to people”, he said.

The first ever official visit of a top diplomat from Israel to the Emirates also served to show that the improving relations between the two countries weren’t affected by the 11-day conflict between Israel and Hamas, as some analysts had feared.

The Arab state broke with the decades-old Arab League policy by normalising its ties with Israel. By doing so, it no longer adhered to the demand that an Israeli-Palestinian peace deal be in place before an Arab country formalises relations with Israel.