Iconic Café Métropole reopens: ‘Not everything is ready yet’ 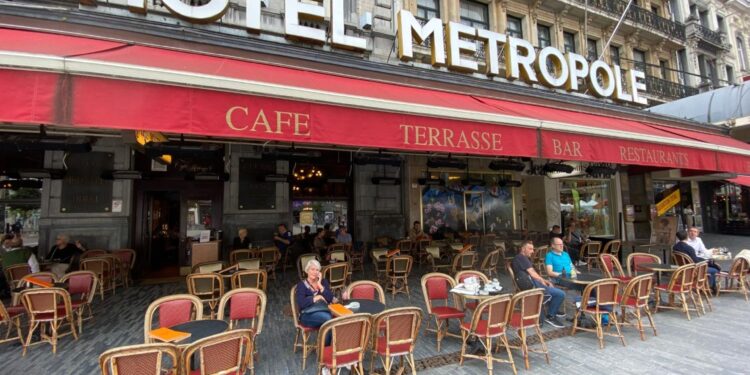 Brussels, (Brussels Morning)- The luxurious Café Métropole on De Brouckèreplein is open again. One of the most famous brasseries in Brussels is currently being tested, because the staff is not yet complete and the menu is not yet ready. But you can already go there for a coffee or good glass on the terrace. “It will get even better in a few weeks.”

Anyone passing by the de Brouckèreplein these days may have already noticed: the Café Métropole has been open again since last Thursday. Lovers of a certain grandeur can again enjoy a drink inside or on the terrace. The luxurious brasserie from 1890 in the hotel of the same name (which remains closed) has closed twice in recent years due to a lack of customers, but has now found a new owner, said BRUZZ.

“We are open, but at the same time we are also testing it,” explains Alexandre Lopes Pontes. “There are still some technical problems, the staff is not yet complete and bilingual enough and our menu is not yet ready. We want to deliver real quality.”

For Lopes Pontes, the reopening is a return to an old love. “I was already head of the former brasserie between 2007 and 2013. A significant part of the staff also worked in Café Métropole before.

Café Métropole had to close its doors several times in recent years. The corona crisis was a hard blow, the closure of the hotel did not help and the absence of other public magnets on the square was also a problem, according to the previous manager. “But I feel in many things that we are in a much better period now,” says Lopes Pontes. “I hear that from a lot of people in my network.”

The City is also committed to ensuring that the square will become a living place in the near future: the Continental Building (known for the Coca-Cola advertisement that has since been extinguished) will soon be given a new meaning, as will the Brouck’R project (with housing, a hotel and offices) on the other side of Café Métropole should soon provide more life. In addition, the square will also receive a work of art, although it has not yet been decided which work that will be.

There is still uncertainty about the future of the luxury hotel Métropole in the same building.