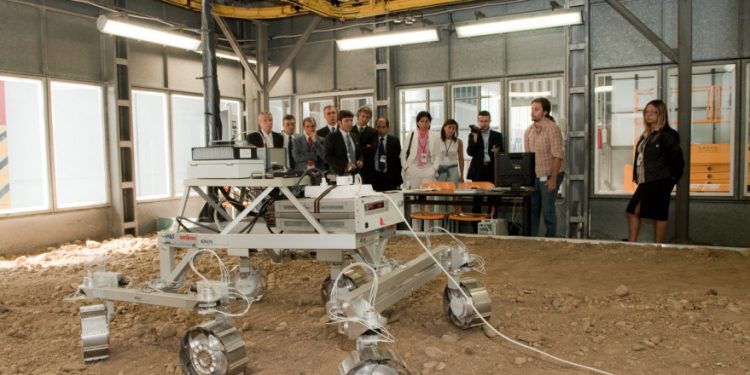 Brussels (Brussels Morning) The Euro-Russian ExoMars mission passed several significant milestones last week as the spacecraft and its Mars rover successfully came through a series of crucial tests in preparation for the 2022 mission launch.

The European Space Agency (ESA), which will manufacture and operate the spacecraft and its rover in cooperation with the Russian Roscosmos, announced on Friday that the completed four-part spacecraft has successfully concluded its spin testing.

The spacecraft consists of a German-built cruise module, tasked with bringing the entire payload from Earth to Mars, the Russian-made descent module and Kazachok lander, and the ESA-made Rosalind Franklin rover.

Travelling to Mars, the entire composition will be spin-stabilised, revolving at some 2.75 revolutions per minute, stopping its spin only as the descent module enters the Martian atmosphere and the first of its two parachutes deploys.

The spinning will be essential to keep the spacecraft on the correct course, while ensuring its radio antenna remains trained on Earth to maintain contact. The testing was intended to verify that the spinning would be evenly balanced without wobbles which would cause attitude control problems for the craft, forcing it to spend too much of its precious maneuvering thruster fuel to maintain course.

The successful tests upped the spin rotations to 30 revolutions per minute, with no imbalances recorded. Upon completion of the environmental testing at Cannes, the spacecraft will return to the Thales Alenia Space’s facilities in Turin, Italy, for further functional testing.

The ROCC also tested the rover’s unique 2-metre drill, which will look for bio-signatures deep beneath the surface of Mars, where any existing bacteria would be protected from the intense radiation experienced on the surface.

The ExoMars mission, originally slated to use the July 2020 launch window and arrive on Mars together with UAE’s Amal, Chinese Tianwen-1 and NASA’s Perseverance, was postponed as ESA and Roscosmos determined the need for more testing prior to launch.

The mission is now aiming for the September 2022 launch window, planning to land on Mars on 10 June 2023. It will be ESA’s third attempt at a soft landing on Mars. Both previous attempts ended in failure. ESA lost communication with the Beagle 2 lander during its descent in 2003, and its Shiaparelli lander crash-landed on Mars during the 2016 ExoMars mission.