by Martin Banks
in Culture and Society 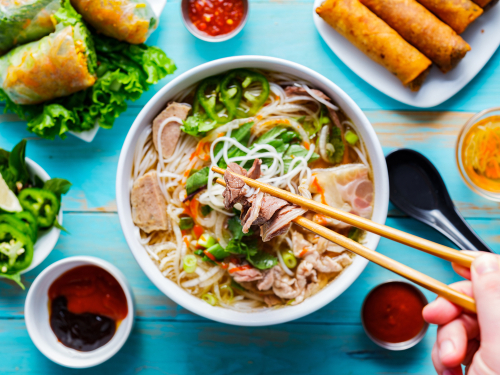 Belgium, (Brussels Morning Newspaper) The year 1986 was marked by several historical landmarks, the year Portugal and Spain joined the EU, bringing the membership to 12, and Britain and France announced plans to build the Channel Tunnel.

In Belgium, the country’s footballers came home to a hero’s welcome after finishing 4th in the Mexico World Cup.

The mid-80s, though, was also notable (in Belgium) for one other event: the opening of L’Orchidee Blanche in Brussels, now one of the acknowledged best Vietnamese restaurants in the country and one which Eurocrats now regularly make a beeline for.

People working at the EU Institutions (European Commission, Parliament and Council), some 4km away, are among its loyal army of guests, testimony to its success and quality. Diplomats, ambassadors, and high-ranking officials are also frequent visitors.

In the past, the Vietnamese Embassy in Brussels even selected this restaurant to help promote “Vietnamese Culinary Week” in Belgium, the idea being to showcase those Vietnamese restos here which serve “typical” food from the country.

Regulars include Xavier Eugene, a senior Belgian-born official working in the Commission, who told this website, “There are other places nearer Schuman where I work but it is well worth coming out to this place for the sheer quality of the food and service. It is terrific. It is a true benchmark for Vietnamese cuisine in Brussels.”

If you are unfamiliar to Vietnamese cuisine, first bear in mind that in the north it is salty, spicy in the center of the country, and sweet in the south. The offerings here, whatever you choose, are mouth-wateringly good and the prices are very reasonable too.

Back in 1986, when it opened in what was then a quiet Brussels neighborhood, the owner Katia, who hails from South Vietnam, could not have realized what a huge success it would be.

This month the restaurant, which means “White Orchid” (fresh orchids are on the tables and often adorn a cocktail or a plate) marks its 36th anniversary, a real milestone in this industry, and it has come a long way in the intervening years. It is now a byword for fine Asian cuisine, so much so that it was awarded the prestigious title of “Best Asian Restaurant in Belgium and Luxembourg” by the renowned food guide, Gault and Millau.  Quite an accolade.

Despite the awful health pandemic that wrought havoc in the hospitality sector, its “army” of loyal customers is flooding back to sample the wonderful delights concocted by a highly talented, Vietnamese-born team. Some, like Huong, head waitress Thuy and Yi have been there for years (16, 20, and 10 years respectively), not forgetting Linh.

In Vietnam, it is quite typical to find women, rather than men, in the kitchen so a (mostly) “all-female team” here continues a long-standing Vietnamese tradition.  The ladies, all very polite and welcoming, are also turned out in quite beautiful traditional South Vietnamese tunics, each specially brought to Belgium from Vietnam, often when one of them returns there for a visit. There is even a fashion show at the restaurant early in the New Year showcasing these quite lovely costumes.

Katia herself says, “We try to serve delicious food and provide a nice, polite welcome. This is why we are so successful.”

Looking to the future she is full of enthusiastic projects, including inviting foreign chefs to her kitchen in order to “merge Vietnamese gastronomy” with those of a chef’s home country.

It’s all part and parcel of Katia’s long-time philosophy, best summed up by her motto: “if you do something, do it with your heart”.