EU welcomes Kosovo’s plan for the north of the country 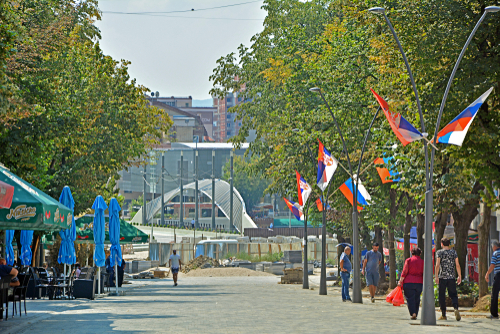 NORTH KOSOVSKA MITROVICA, KOSOVO - AUGUST 16, 2017 - The Serbian northern part of the divided city of Kosovska Mitrovica with the view on the New Bridge over Ibar river

Belgium, (Brussels Morning Newspaper) Josep Borrell, High Representative of the EU for Foreign Affairs and Security Policy, welcomed Kosovo’s plan for the north of the country.

Borrell pointed out on Sunday that Kosovo decided to delay the plan according to which Serbs in the north of the country would have to apply for license plates issued by Pristina, according to Reuters reporting.

The Government of Kosovo decided to delay the plan until September over tensions between locals in the north and police.

Protesters blocked roads leading to border crossings Jarinje and Brnjak with trucks and heavy machinery on Sunday. Serbs are a majority in the north of Kosovo, with police stressing that authorities had to close the two border crossings.

“Expect all roadblocks to be removed immediately,” Borrell noted and added that Kosovo and Serbia should negotiate a solution through EU-facilitated talks.

NATO’s Kosovo Force (KFOR) warned that “the overall security situation in the northern municipalities of Kosovo is tense.”

Maria Zakharova, spokesperson of the Russian Ministry of Foreign Affairs, stressed that “groundless discriminatory rules” imposed by Kosovo are causing tensions in the north of the country.

While Kosovo declared independence from Serbia roughly 14 years ago, approximately 50,000 Serbs in northern municipalities refuse to recognise authorities in Pristina and use documents and license plates issued by Serbian authorities.

More than 100 countries have recognised Kosovo thus far, but Serbia and Russia have not.

The latest decision pushes back implementation to 1 September, with the government pointing out that Serbian citizens will also have to get an additional document to visit Kosovo.

Serbian authorities introduced a similar rule for citizens of Kosovo who visit the country.

The Kosovar government announced it would delay the plan after it consulted with US and EU ambassadors.

Police reported earlier on Sunday that weapons were discharged “in the direction of police units, but fortunately no one was wounded.”

It added that some protestors physically attacked several Albanians and automobiles on blocked roads.

Serbian protestors blocked the same roads roughly one year ago over the license plates plan, with Kosovo deploying special police forces and Serbia flying fighter jets near the border.

Tags: Kosovo's plan for the north of the countryMain-Slider